And the winner is: First ISU Skating Award recipients revealed 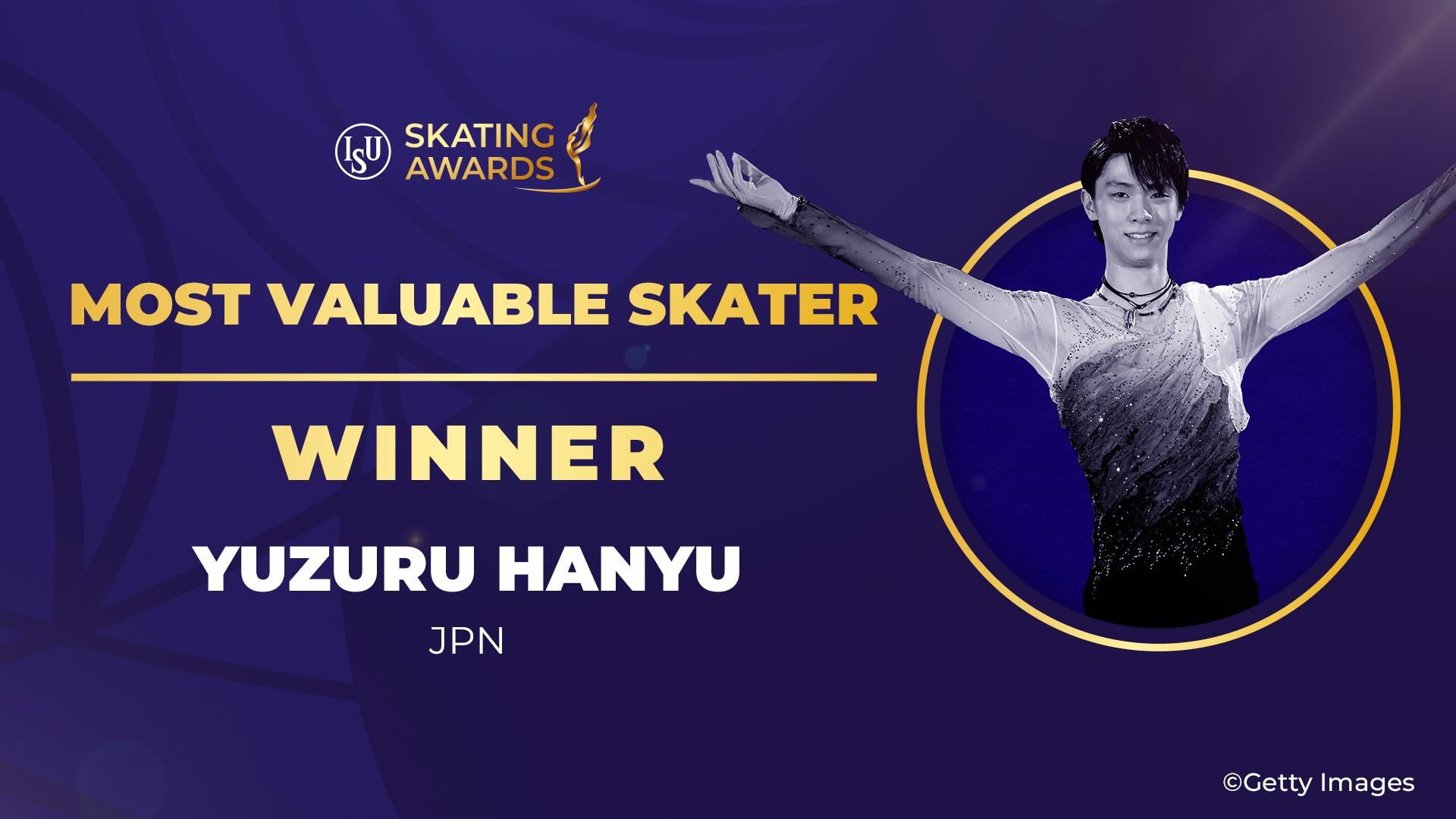 In the category “Most Valuable Skater” of the 2019/20 season, Hanyu was up against Nathan Chen (USA) and Papadakis/Cizeron. The two-time Olympic Champion is one of the most decorated skaters in the history of the sport and now added another prize to his impressive collection.

“Figure Skating is a sport, yes there are shows but we're athletes and competitors. You can't compare with only one skater. There are so many amateur skaters who compete. This is how Figure Skating as a sport is made,” the two-time Olympic Champion said. “In almost every moment of daily life, I'm constantly thinking of Figure Skating and I'm always hoping to become better and stronger. I spend every day trying to become better at something that I couldn't do the day before. As an amateur skater, I hope to work hard and deliver the outcomes I desire. As my family, coaches and fans expect from me,” he concluded. 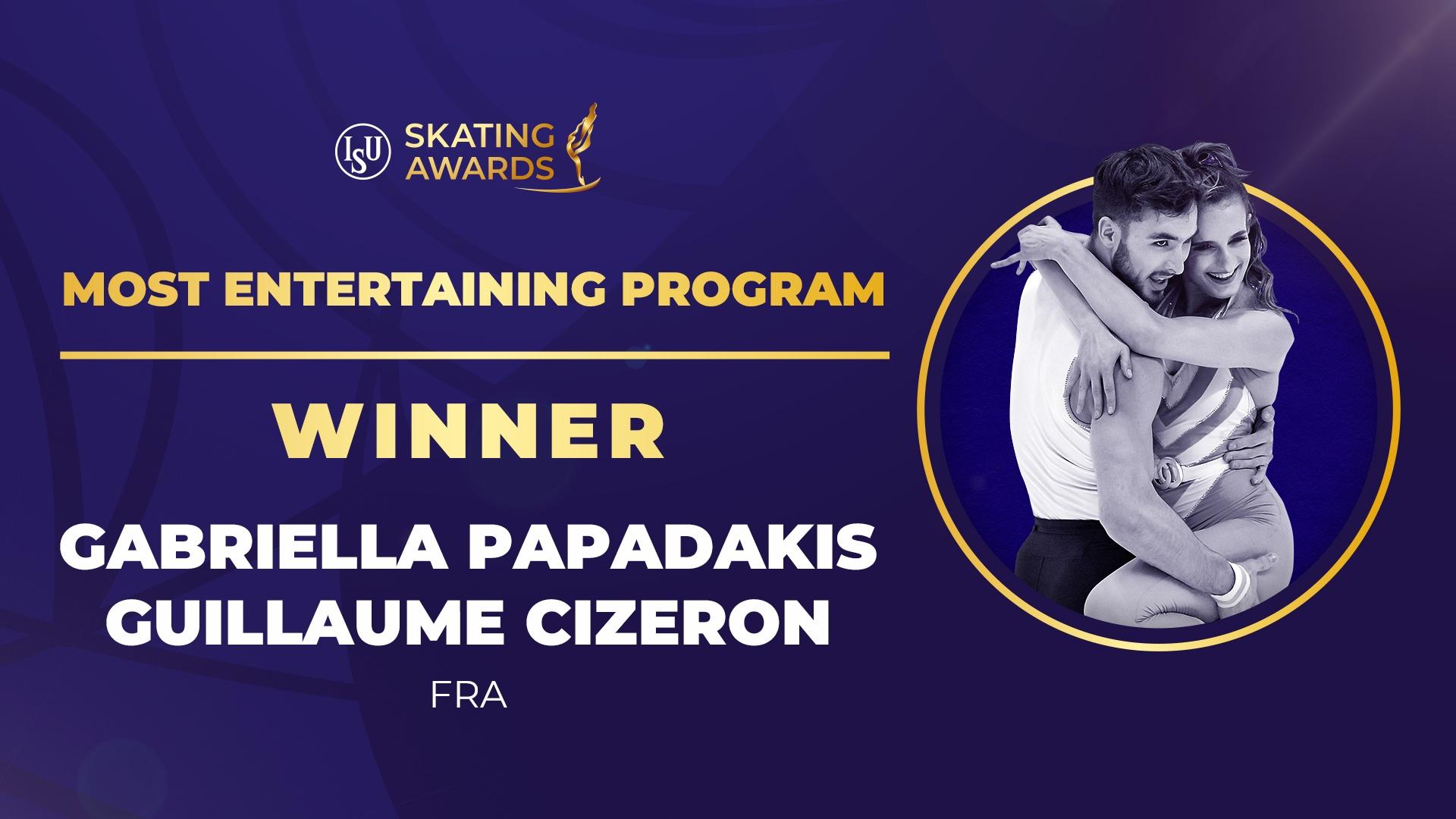 Papadakis/Cizeron earned the “Most Entertaining Program” award of the 2019/20 season for their unique Rhythm Dance to “Fame”.

“It was really fun, it is a part of our personality that is there. It is inside us, but we’ve never really showed to the public. At first we had doubts if it was a good idea, but it was fun to go for it,” Papadakis said about the program.

“We want to thank you all for this great honor. It’s been one of the most fun programs to choreograph for us. Our whole team in Montreal supported us in our choice and they pushed us to go into that fun vibe. The whole team, Romain (Haguenauer), Marie-France (Dubreuil), Sam Chouinard and our dance coach Emilie Josset. They are all so good at what they do and they brought it together what makes this program work,” Cizeron added.

The other nominees were Evgenia Medvedeva (RUS) with her “Memoirs of a Geisha” Free Skating (choreographed by Shae-Lynn Bourne) and Kevin Aymoz (FRA) for his Prince Short Program (choreographed by Aymoz, Silvia Fontana and John Zimmerman). 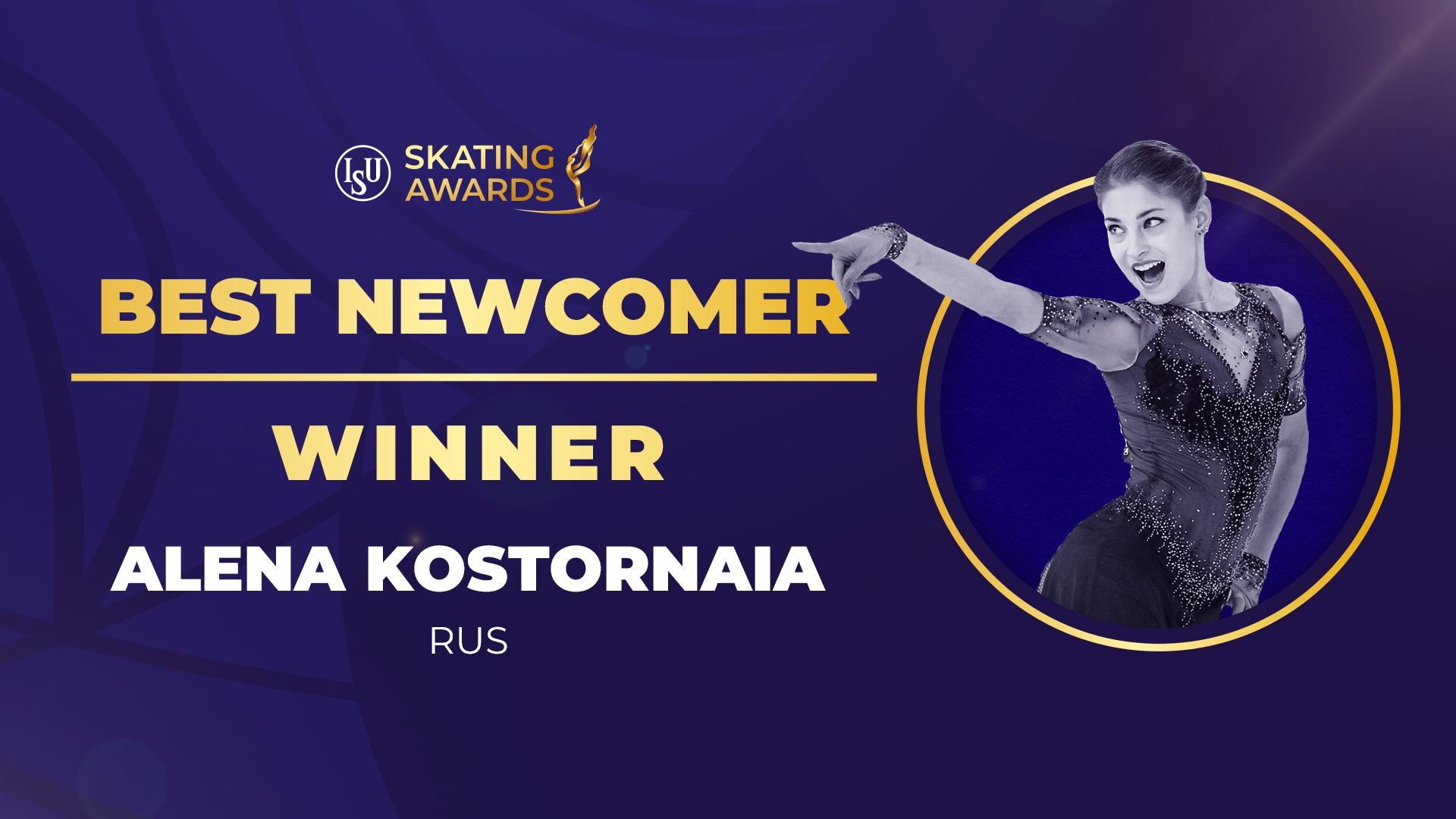 Kostornaia grabbed the prize as the “Best Newcomer”. In her senior debut, the 16-year-old struck gold at each international competition she entered including the ISU Grand Prix of Figure Skating Final and the ISU European Figure Skating Championships. “I am really very excited, because this was completely unexpected. I couldn’t imagine that I would win,” Kostornaia said. “I didn’t even find the right words, because I didn’t fully realize that this big award goes to me. This award means a lot to me, I know that people support me and now I am even more sure about that. I don’t want to disappoint anyone and that gives me even more energy, confidence and motivation to work and improve with every day,” she continued.

The other finalists in this category were “quad queen” Alexandra Trusova (RUS) and 2020 Four Continents silver medalist Young You (KOR). 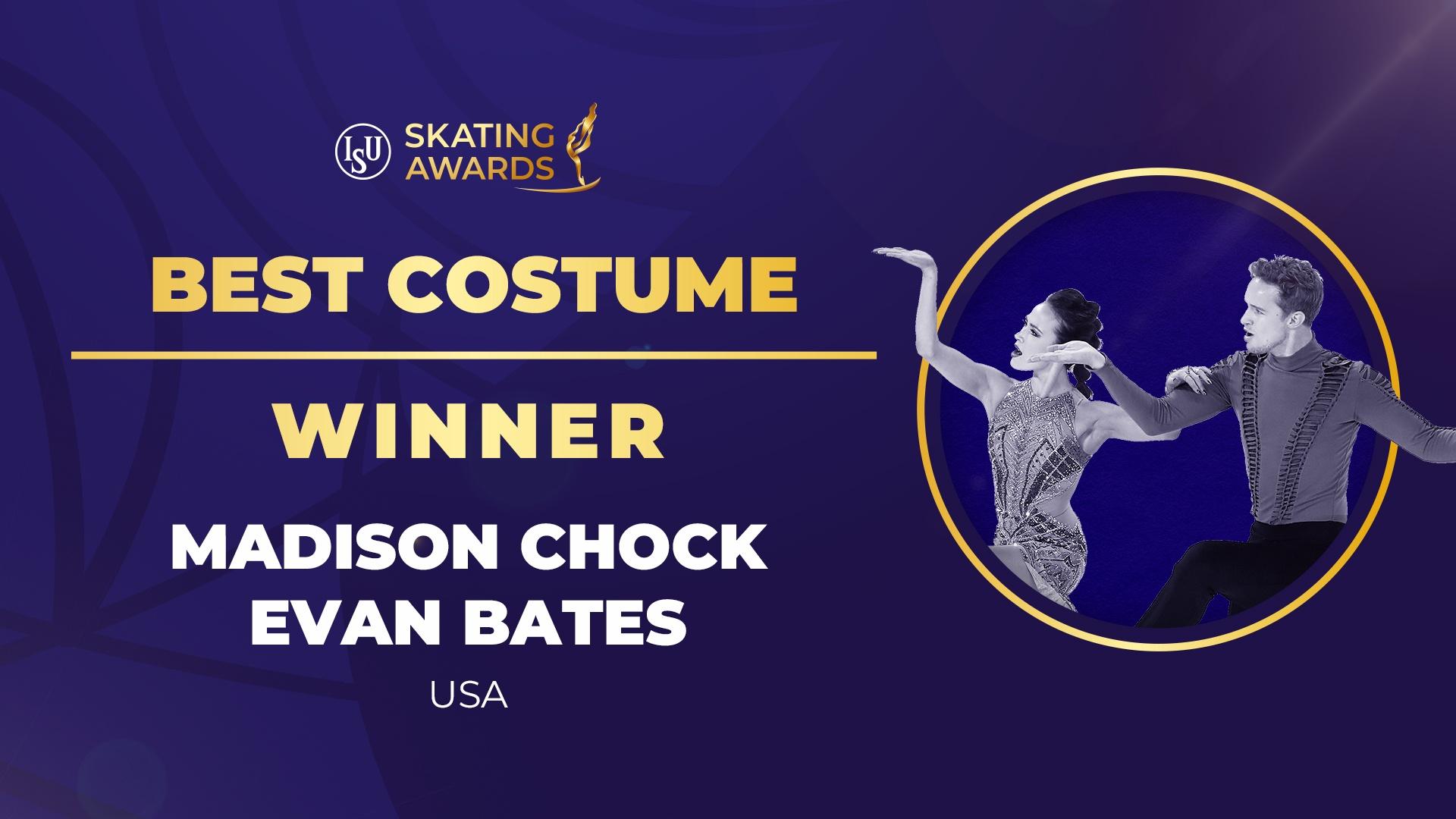 Chock/Bates were awarded the prize for their costumes of their “Egyptian Snake Dance” program, created by designer Mathieu Caron.

“It was really important for us to make sure that our story was clear. We wanted to make sure that our costumes emulated our characters very well,” Chock commented. “I wanted my dress to feel like snake skin on my skin and I think Mathieu and his team did an incredible job. For Evan's as well. He was the traveller, the charmer who enticed me the entire program so his costume is like he has been travelling, so there are rips and tears, but in a fashionable way,” she added.

“We have been working together for several years and our collaboration is very natural. Madison comes to me with inspiration pictures, colors and details that are important to her,” Caron explained. 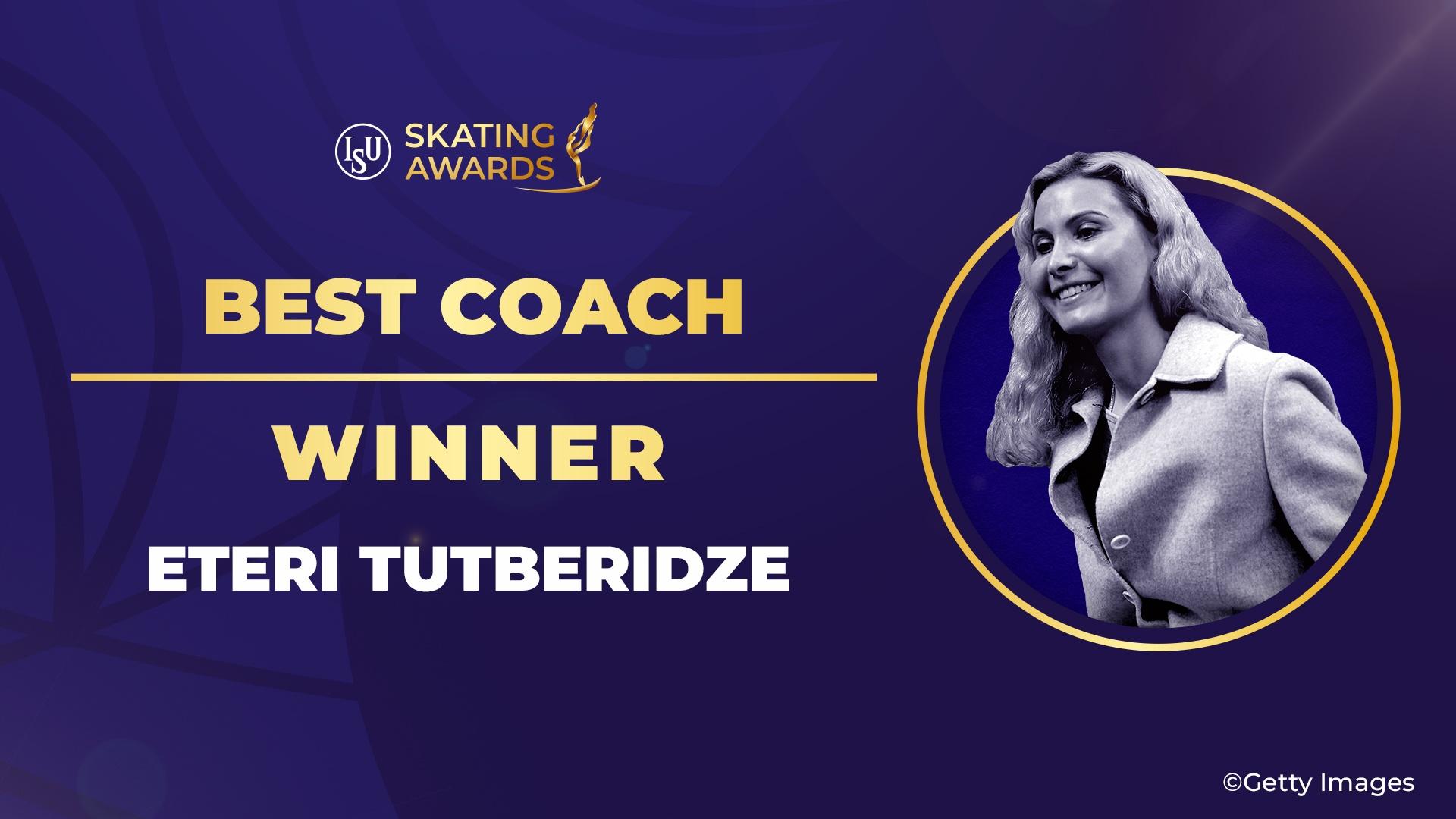 In the “Best Coach” category, Eteri Tutberidze, who coaches among others Kostornaia and Shcherbakova, was nominated alongside Rafael Arutyunyan and Brian Orser. “Obviously, for me as probably for each coach this (award) is the recognition of a path already done, work already done. Even more so as my competitors were very worthy. It was an honor already to have been nominated,” Tutberidze said. “We are just trying to do something useful every day under the given circumstances. The secret of our work is very simple – we love what we are doing, there is nothing else.” 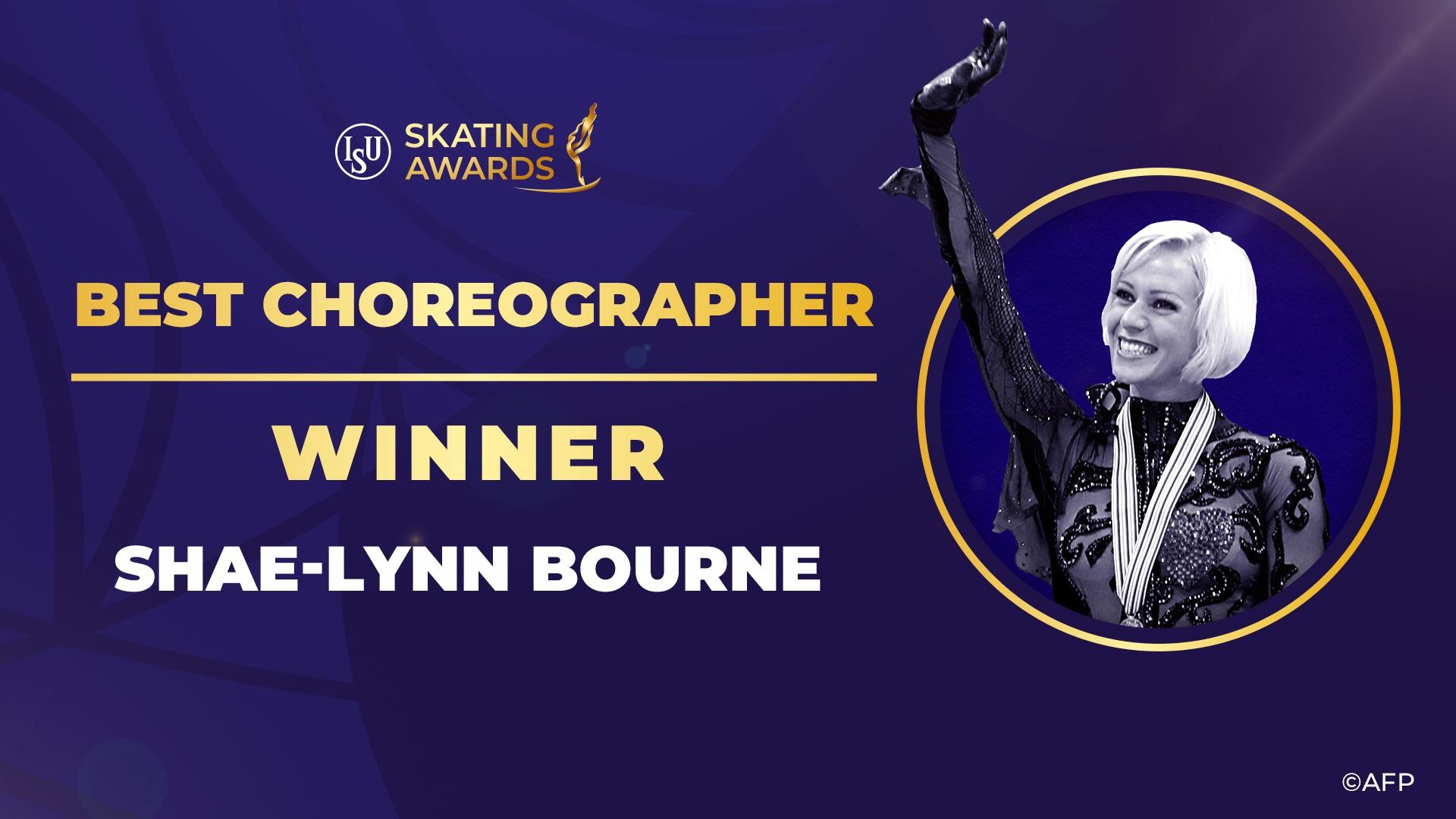 World Ice Dance Champion Shae-Lynn Bourne won the “Best Choreographer” award. She had crafted programs for Medvedeva, Mariah Bell (USA), Shoma Uno (JPN), Rika Kihira (JPN) and many other top skaters. Her “Memoirs of a Geisha” program for Medvedeva was nominated in the “Most Entertaining Program”.

“I have such a passion for the ice and that glide. I love sharing the ice with people that have that passion and feel that joy and freedom,” Bourne commented. “What I love most is getting to know the skater and bringing out who they are, no matter what the story is that we decide on that the audience gets to see who they are. That's the best part and that's for me when the goose bumps come. It's what makes this job forever enjoyable. I always look forward to the next one.”

The other nominated choreographers were Marie-France Dubreuil (CAN) and Lori Nichol (CAN).

Finally, Kurt Browing received the Lifetime Achievement Award. The four-time World Champion made history as the first skater to officially land a quadruple jump, the toeloop, in competition. He is also known for his qualities as a performer, for example for his unique interpretation of “Singing in the Rain”. Browning also has choreographed programs for top skaters.

“Honestly just thank you skating world, we're all family and we all love each other and all support each other and I just love being part of this big wonderful family and doing everything I can,” Browning said. “One of the things I am proud of is longevity. I forget to quit. I am so thrilled with the sport that I never want to quit and I want to be connected to figure skating for the rest of my life. I am thrilled and honored to be sitting here and talking about my career.”

The show that was produced by Art on Ice featured many additional highlights such as guest star Aloe Blacc performing his new single “My Way”, which is part of his new album “All Love Everything”, that will be released on October 2, 2020.

Re-watch the show on demand and relive the excitement on the ISU Skating Awards page.

Only one day to go before the ISU Skating Awards!

Nominees of the inaugural ISU Skating Awards 2020 are revealed