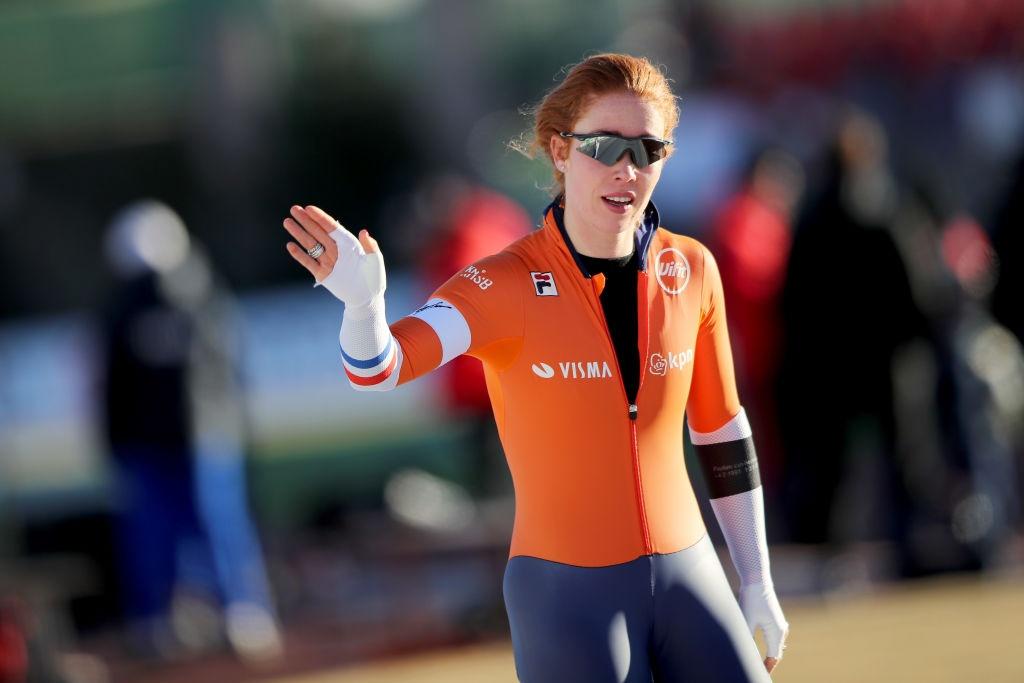 Antoinette de Jong (NED) arrived in new territory on the first day of the ISU European Allround Championships in Collalbo, Italy, on Friday. The bronze medalist of the previous two European Championships won the 500m and the 3000m and leads the classification. "I am used to chasing others, and now I'm the one who's being chased," she said. Francesca Lollobrigida (ITA) is ranked second and Ireen Wüst (NED) third.

Antoinette de Jong (NED) took a head start in the tournament, winning the 500m in 39.19 seconds. The 23-year-old Dutch skater was 0.07 faster than Russia's Elizaveta Kazelina and 0.36 faster than Francesca Lollobrigida (ITA), who came third in a personal best of 39.56 on home ice.

Lollobrigida skated versus defending champion Ireen Wüst, of the Netherlands, who began the tournament with a false start. Wüst finished in fourth place, 0.53 seconds behind De Jong. Five-time champion Martina Sáblíková (CZE) finished in 11th place in the 500m. The long-distance specialist was 1.76 slower than De Jong, which translated into a 10.56 gap for the 3000m. 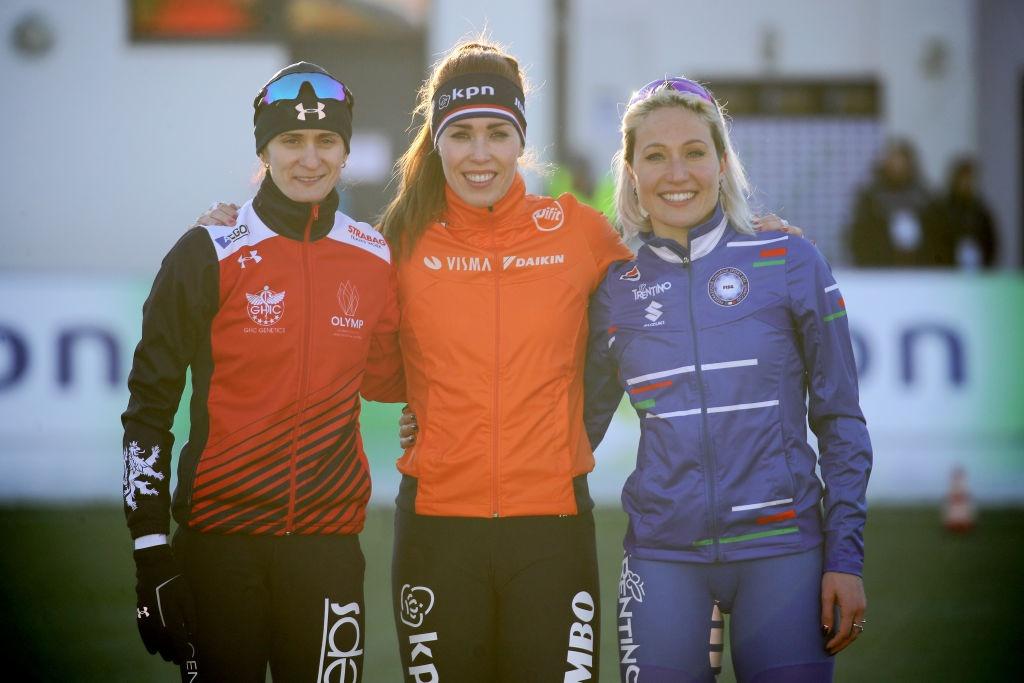 Sáblíková did manage to gain time back in the 3000m. The Czech skater stopped the clock at 4 minutes and 8.22 seconds, finishing faster than third-placed Lollobrigida (4:11.28) and Russian long-distance specialist Natalya Voronina (4:11.30), who came fourth in the 3000m. But it was not enough.

De Jong started after Sáblíková. She was a few tenths behind the Czech racer's split times for most of the race, but managed to edge out the  31-year-old by 0.15 seconds after a superior final lap to clock 4:08.07.

"I'm very satisfied with my first day. My 500m was good. My coach joked that it was not a personal best, but I did improve my personal best over 100m," De Jong said.

"Then I saw that Sáblíková skated a good 3000m, and I just skated on intuition.

"It's too early to celebrate yet. I'm in a position that I can only lose, whereas I used to be in the position where I could only win. But I've grown mentally over the years and I think I can cope with the pressure. Today felt good and I want to carry that feeling into tomorrow's 500m and 5000m races." 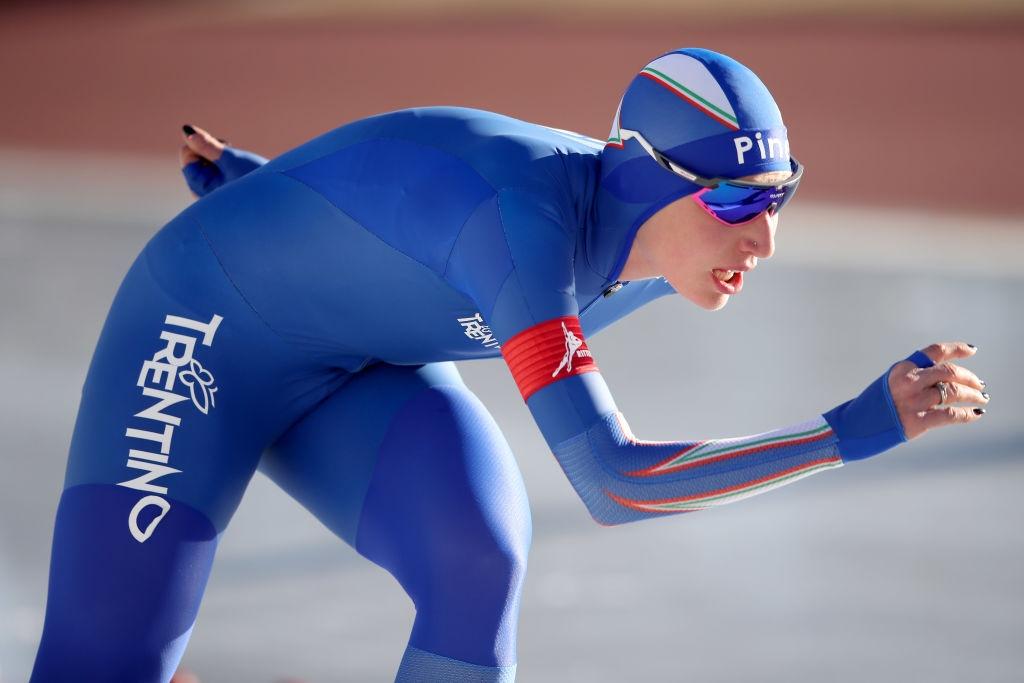 Home favourite in contention for podium

Lollobrigida was happy too. Primarily known as a Mass Start-specialist, the Italian skater was excited to find herself in second position on the rankings after the first day of an international Allround tournament.

"I did not expect this, because I was ill last week and when I arrived here my skating was very bad. But today it was OK," she said.

Lollobrigida is in contention for a first ever podium spot in an Allround tournament, but does not want to look too far ahead.

"I'm happy that I can compete with the best ones this year. Tomorrow I'm going to focus on the 1500m and then I'll just have to pray for the 5000m."

A tribute to Van Deutekom

Wüst suffered physically and mentally in the 3000m. With 4:14.62 she ended up in seventh place. Like all of the Dutch skaters, Wüst had a black mourning armband manufactured into her tracksuit to honor the late 2008 World Allround Champion, Paulien van Deutekom (37), who died from cancer last week. Van Deutekom was Wüst's best friend, and the defending champion was deeply affected by the tragic loss. Wüst had returned to Collalbo after the funeral on Wednesday and had struggled to prepare properly for the tournament.

"I wanted to race here as a tribute," she said in tears, after she had finished the 3000m.

Wüst vowed to fight for a podium spot until the end. "Paulien was someone who never gave up. I'm going to try to eat a little something and try to get some sleep, which I haven't managed over the past two weeks or so. And then I hope to have a bit more energy tomorrow."

For full entry lists and further information regarding the European Speed Skating Championships please visit: isu.org/speed-skating. Results are here and you can follow the discussion on social media by using #EuroSpeed and #SpeedSkating.

Wüst (NED) and Kodaira (JPN) break their own track records

Kulizhnikov and Yuskov shine as Russian men dominate in Poland