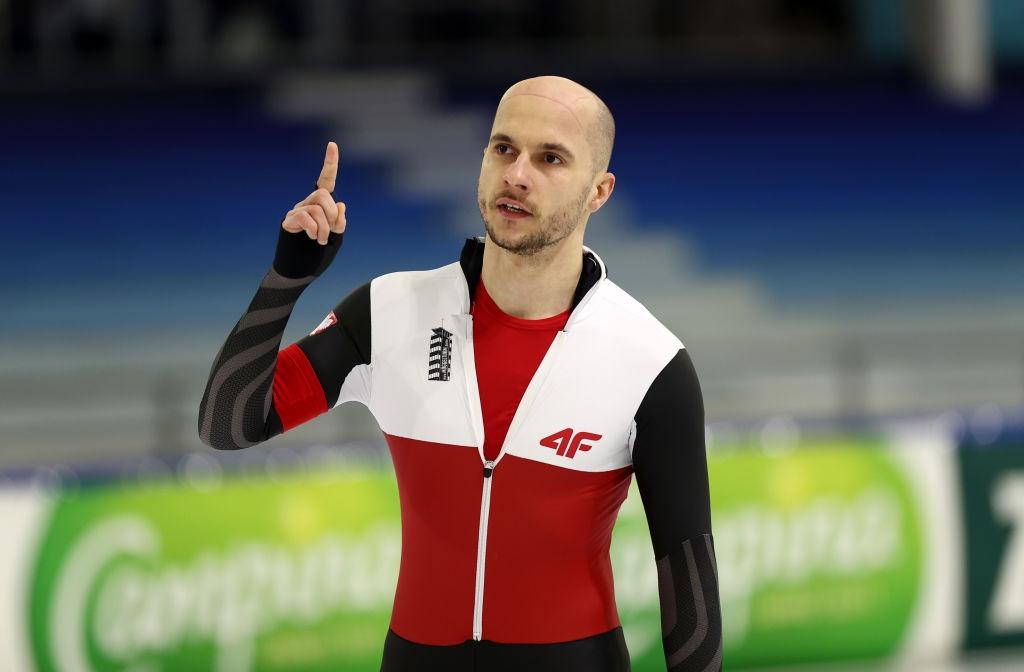 Piotr Michalski (POL) and Bart Swings (BEL) ended the Netherlands’ unbeaten run at the European Championships on Sunday. After two days of non-stop home wins, Polish sprinter Michalski became the first non-Dutchman to take a gold medal in Heerenveen, winning the 500m to seal a career-first international title. Swings then followed suit winning the Mass Start for Belgium, after Kjeld Nuis (NED) had started the day winning his first European title in the 1500m.

No apologies from speedy Michalski

“It’s good for the sport to have someone new on the podium,” Michalski said after his surprise 500m win. “I hope the Dutch fans are not mad at me. Sorry, but I felt good today and I had to win.”

The 27-year-old had never won an international medal before he took to the ice in the final pairing of the 500m versus Kai Verbij (NED).

“I was happy that I was paired with Kai,” he said. “I knew that if I went out from the first outer lane, I would be close to him (to get a draft at the backstretch). It would be a tight race and my second turn was really good, I came first and the only thought I had was to go to the line as fast as I could.

“I know he’s (Verbij) good, he would probably win here. So if I’m ahead of him, it’s great. When I saw the green number one (on the scoreboard), it was like a big relief.”

Michalski finished in 34.60 seconds, 0.16 seconds ahead of Verbij, who ended up in fourth place. The difference with silver medalist Merijn Scheperkamp (NED) was just one hundredth of a second.

“I’m very content about the time I set,” Scheperkamp said, “Disappointment predominates. To lose it on 0.01s leaves a bitter taste. If he would have beaten me by 10 hundredths, I would have been OK with it, but now I just lose it at the start. 9.8 is just not a good opener for me.”

Scheperkamp was paired with teammate Dai Dai N’tab, who missed out on Olympic qualification after finishing second to Scheperkamp at the trials a week earlier.

“He was unlucky at the trials (N’tab was hampered by a crashing pairmate and a false start by another pairmate in his two 500m races), so I really wanted to show that I belong at the Games,” Scheperkamp said.

N’tab finished 0.15 seconds behind Scheperkamp to seize bronze. He had a far from ideal preparation for the European Championships, having had to quarantine after a friend he celebrated New Year’s Eve with tested positive for Covid-19.

“I had a terrible week, at home in quarantine and not being able to train. I got here three days ago and I was still frustrated (about missing out on Olympic qualification). After a week without training on ice, 34.7s is actually not too bad.”

Despite N’tab’s frustration, he did not hold a grudge against Scheperkamp, saying: “Of course it’s awkward sometimes (to train together as teammates), for me but also for him. He feels a bit guilty, but I told him that he doesn’t need to. I always skate to win and I expect my rivals and my teammates to do the same.” 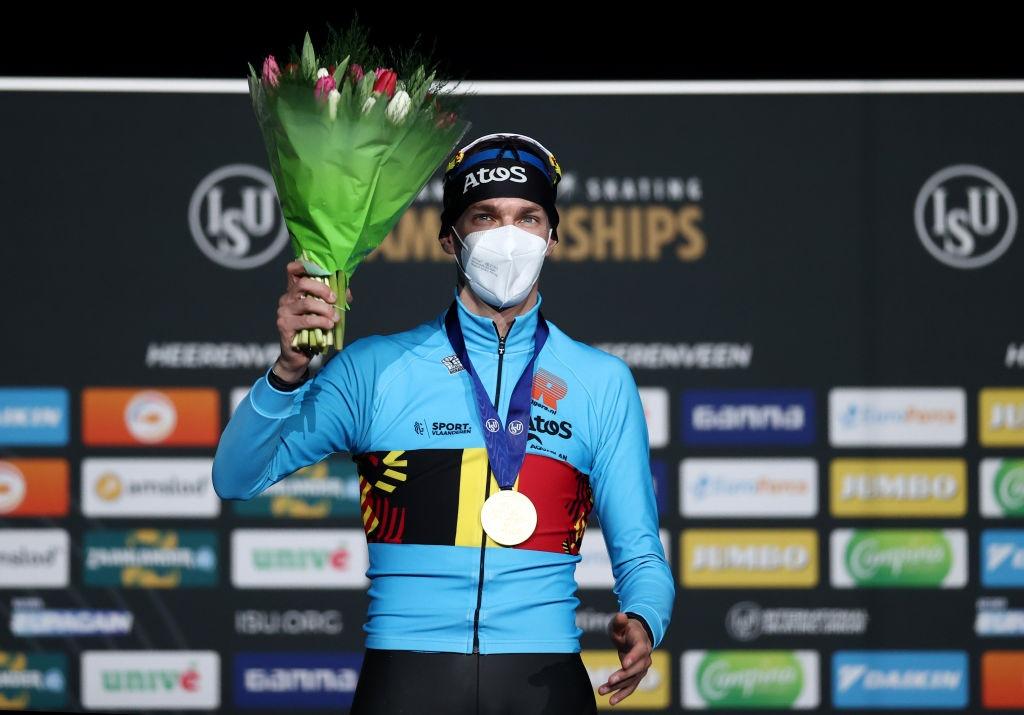 The Men’s Mass Start finished in some confusion. Dutchman Jorrit Bergsma (NED) thought there was one lap to go when Swings (BEL) sprinted to victory, with Livio Wenger (SUI) and Ruslan Zakharov (RUS) taking silver and bronze.

Swings had not been confused about the amount of laps he had skated.

“I think I heard the bell (to indicate the final lap), but it was a bit chaotic with some stragglers in front of me when I crossed the line. The Mass Start is always a bit chaotic, but that’s also what’s exciting about it.

“I had expected the Dutch (Bergsma and Marcel Bosker) to attack and take the initiative, which they did. But when there’s a title at stake, everybody wants to jump along, so the pace was high throughout the race and a sprint after a fast race is very much in my favor.”

Looking forward to the Olympic Games in Beijing, Swings expects something different.

“That will be a completely different race. Today I knew I was the fastest sprinter of the pack, but that’s not the case in Beijing. There’s also Koreans and Americans who can sprint very fast.”

Sunday’s action-packed men’s program started with the men’s 1500m. Olympic Champion Kjeld Nuis (NED) and World Champion Thomas Krol (NED) have dominated the distance in recent years but had not produced their best performances in this season’s World Cup races.

Nuis used the last international race before defending his Olympic title in Beijing to get back into form. He clocked one minute and 43.60 seconds in the penultimate pairing, and Krol was not able to match him in the final race, finishing in 1:43.91.

“I’ve been insecure about the 1500m after those World Cup series,” Nuis said. “I think Krol too, but he at least had a decent one in Salt Lake City, and I was really at my wits’ end there. I doubted my stamina, everything. To skate two good ones in a row (Nuis also won the 1500m at the Dutch trials last week) gives me so much confidence. This is my first European title, my first international title in two years. I’m really stoked.” 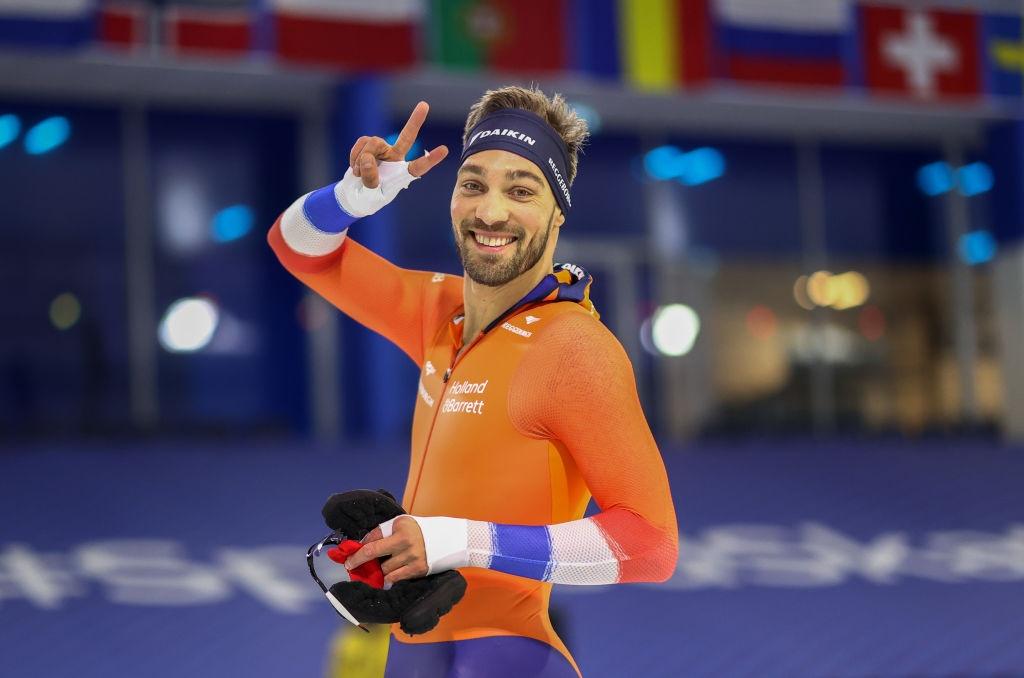 Krol, meanwhile, was not too unhappy about his own race.

“I’m actually quite content. Of course there’s a bit of disappointment, but Kjeld was just that little bit better today,” he said. “I might have been a little faster in the final lap, when I had a misstroke, but overall it was OK for now. I’m going for some serious training now, and then it’s Beijing.”

At the Olympics, Krol will face Nuis again and also Allan Dahl Johansson, the 23-year-old Norwegian who took bronze in 1:44.16, only 0.55s behind winner Nuis.

“That tells me they (Nuis and Krol) were in top shape last week (at the Dutch trials), and they have been training this week,” Johansson said. “I was supposed to beat them, especially Thomas (Krol), but I’ll beat them next time, at the Olympics, or wherever it is.”