Jutta Leerdam (NED) claimed her first World Sprint title at the ISU World Championships in Hamar on Friday. The 23-year-old Dutchwoman beat Femke Kok (NED) by 0.37s in the final 1000m to edge out her compatriot by 0.07 points in the overall classification. Vanessa Herzog (AUT) claimed bronze, 1.08 points off the winner. It was the first time on the World Sprint Championships podium for all three women. 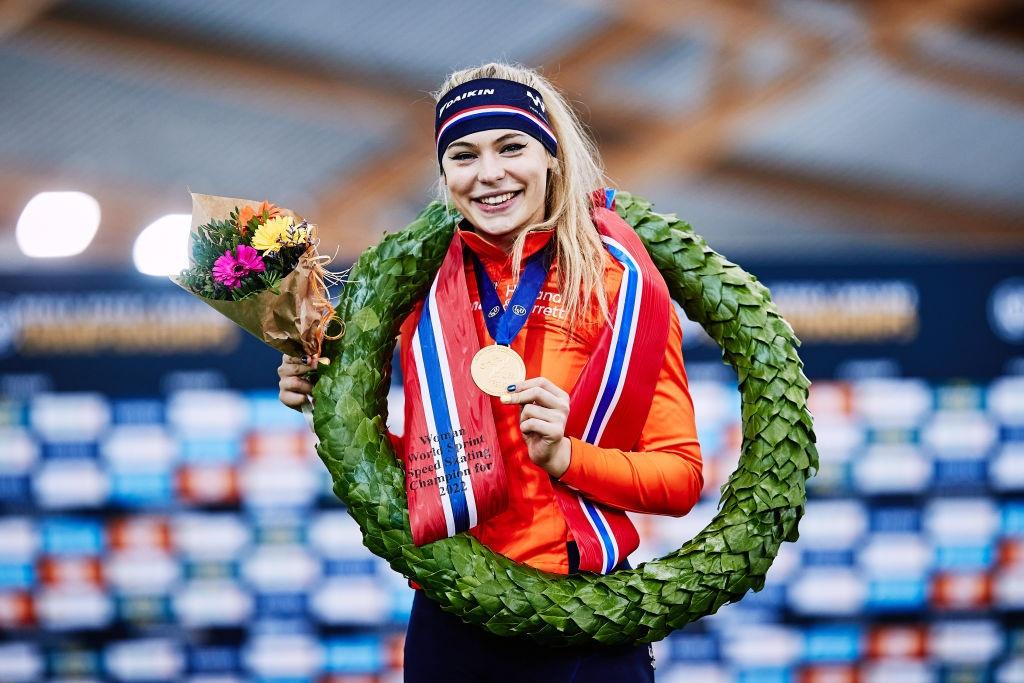 Kok had a difficult start to the second day of the Sprint Tournament. She and pair-mate Kimi Goetz (USA) initially did not notice that they were called back to the line after a late second shot from the starter in the 500m.

“I was pretty angry,” Kok said. “It was a very strange situation. I was already 30 metres underway, full gas, and my opponent as well, when suddenly a man with a flag came onto the track. There was a lot of noise from the crowd and we hadn’t heard a second shot or a whistle. It cost a lot of energy to start all-out for 50m, turn back when you’re already in the corner and you have to start again a minute later.”

Despite the turmoil, Kok set the fastest opener in 10.46s after the restart but coming off the first outer corner she encountered another problem. Although Goetz was slightly ahead, Kok could not change lanes behind her back. The Dutchwoman had more speed and eventually surged past in time for the change-up in front and she was the only one to stop the clock below 38 seconds, in 37.93s.

“I was so aggressive, my opener was good and the first corner too but then the backstretch was sh*t. I thought she would cross straight in front but she didn’t. It worked out well but I couldn’t just skate freely.” 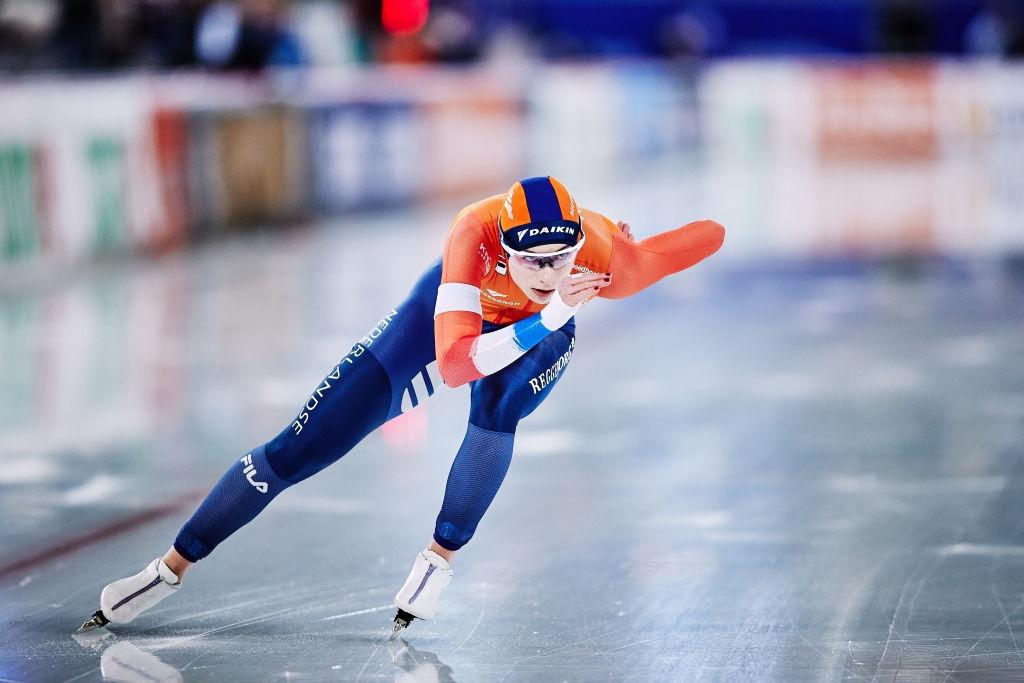 Leerdam falls back to second

Despite her fast opener, Kok was 0.15s slower than she had been on the first day. Both Andzelika Wójcik (POL) and Herzog were also slower than they had been on Thursday, finishing second in 38.00s and third in 38.05s. Leerdam copied the time she set on Thursday. She had to give up the lead in the standings but she kept Kok in sight with a 0.11 point gap, 0.22 seconds in the 1000m.

“My 500m was better than yesterday but I still did not hit my strokes the way I can, so I always have to make up for it in the 1000m,” Leerdam said. “But it doesn’t have to be perfect when you win, apparently I had room for mistakes.”

Leerdam skated her 500m straight after Kok had her troubles with the false start. She said: “I was in the final race and I was preparing for the start when suddenly everything stops. I had to go for another (warm-up) lap again. That did not just affect her but me too.” 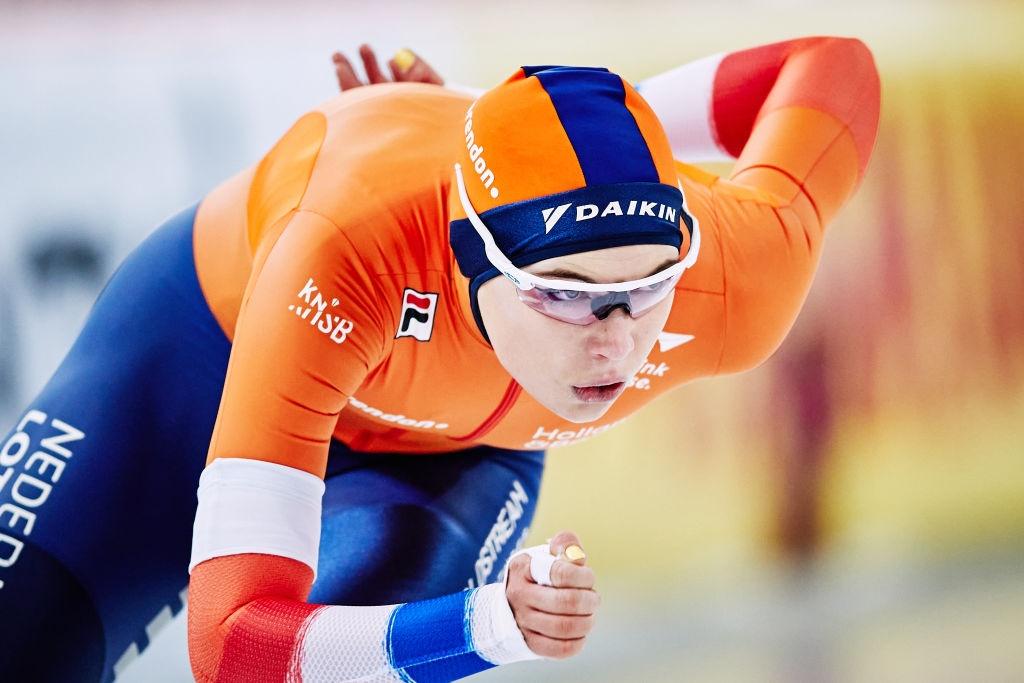 In the 1000m, Leerdam had troubles of her own at the start. She commented: “I was pretty nervous and I was shaking a little. The starter waited very long, probably because I was shaking, and then I got a false start. It just took too long to come to a standstill and that’s why he blew the whistle.”

Once she was off the blocks, Leerdam got rid of the nerves. With a time of one minute, 14.96s she was the only one to stop the clock before 1:15. Kok skated in the final pairing. With 1:15.33 she was 0.15s short of defending her lead against Leerdam.

She looked back with mixed feelings: “I won the 500m twice and I felt so good today. My 1000m was good, I was one of the few who set a faster time than on the first day, and then to lose the title by a 0.07-point margin, that’s a bummer. But on the other hand, this is my first ever World Sprint Championships and to be able to fight for the title makes me proud.”

Leerdam wants it all

Leerdam also took her first ever World Sprint Championships medal. She said: “I wanted this title so badly. Now I’ve got the World Sprint title, a World Single distance title (1000m in 2020) and an Olympic silver medal (2022 Beijing). When I also win an Olympic gold and a world record, I’ve got everything I want. And then I want more of the same.”

The win was an emotional one for Leerdam for another reason. Her coach Kosta Poltavets comes from Kharkiv in Ukraine. He was trackside to support Leerdam and his skater had her nails painted blue and yellow. She said: “He tries to be here and focus on helping me skate better but I can feel that he’s emotionally involved with the war and that also affects me. When he is sad, I feel it too.” 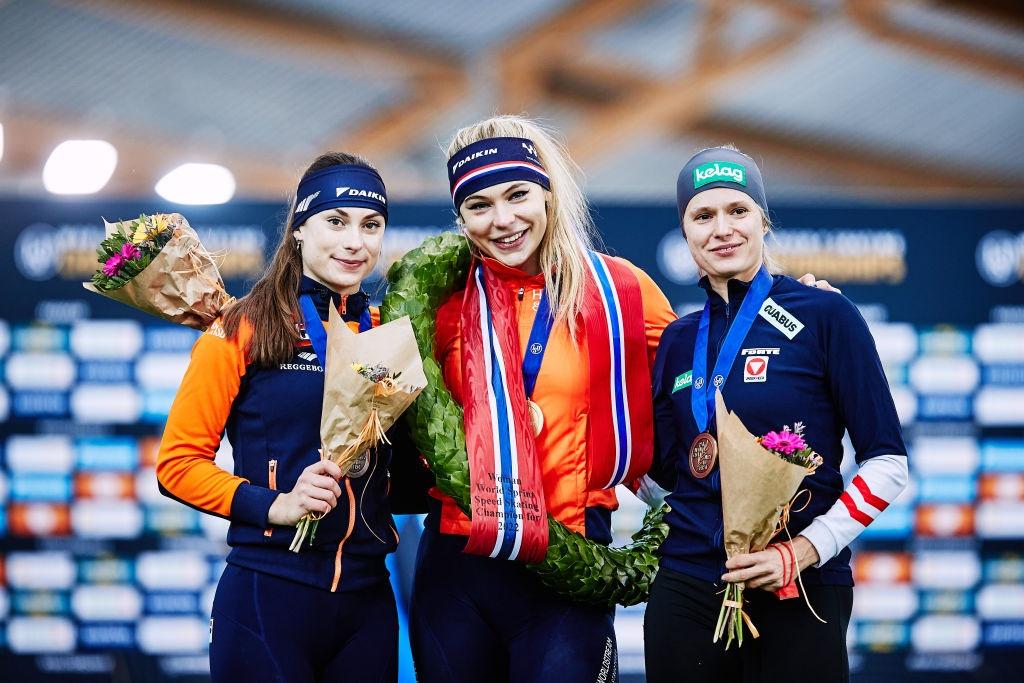 Austrian Herzog finished third in the 1000m to secure third place in the final ranking too. “This is the first World Sprint medal for Austria ever,” she laughed. The 2019 World Champion in the 500m had finally managed to skate without pain after back troubles throughout the season. She said: “I’m pain free now, for four weeks. I was happy to be able to race in the Olympics (coming fourth in the 500m and eighth in the 1000m). The last time I did two races in one day was more than a year ago. I didn't know if I could do four races in two days, if my back would hold it. But I had enough energy for a pretty good 1000m today.”