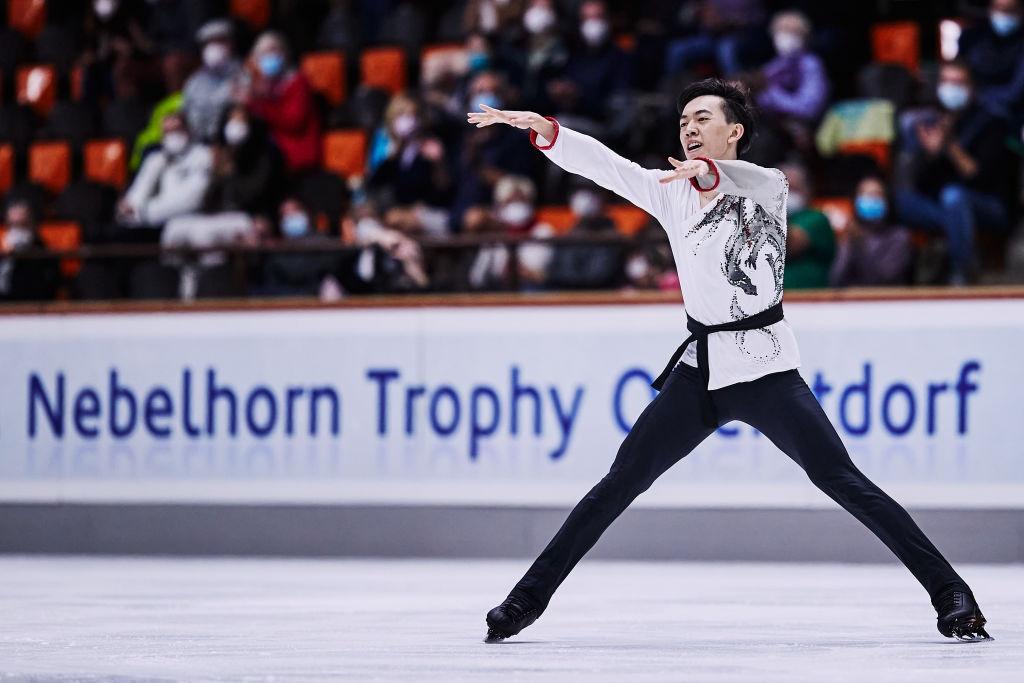 2019 ISU World bronze medalist Vincent Zhou (USA) came as the favorite to Oberstdorf and did not disappoint. He laid down two strong performances to score a runaway victory with 284.23 points, 40 points ahead of France’s Adam Siao Him Fa . Zhou hit a big quad Lutz and three more quads in his Free Skating to “Crouching Tiger, Hidden Dragon”. However, he slightly underrotated some of his jumps that were marked with a “q” – on the quarter.

"That was really fun to perform, having worked very hard on the performance overall, not just skating end to end to make jumps, but making everything high quality,” Zhou said. “I'm really happy to be able to perform like that and finally have a really good crowd. I am very grateful to have won an Olympic spot for the USA." Zhou secured a third spot for the U.S. men – that they had missed at the ISU World Championships 2021 when Zhou did not make the final Free Skating.

Siao Him Fa earned 243.78 points and a second spot for France. Russia’s Mark Kondratiuk placed third on 241,06 points and got the Russian men a third quota place for Beijing 2022. Sihyeong Lee (KOR) in fifth, Vladimir Litvintsev (AZE) in sixth, Brendan Kerry (AUS) in seventh and  Roman Sadovsky (CAN) in eighth place picked up the remaining quota places. Overall, 25 of the 30 Men in the competition were vying for one of the seven tickets to Beijing 2022.

2020 ISU World Junior bronze medalist Alysa Liu (USA) celebrated victory and secured a third Olympic berth for the U.S. women. Poland’s Ekaterina Kurakova skated to the silver medal and Viktoriia Safonova of Belarus earned the bronze. Both got one quota place for their countries.

Liu, who debuts at the international senior level this season, led from beginning to finish and delivered two excellent performances. The only glitch in her Free Skating to Petr Tchaikovski’s Violin Concerto came when she singled her planned triple Axel. She scored 207.40 points.

“This competition was really fun. I was very happy with my short program, it felt good. I was not nervous. I was skating for myself out there, and for the US to get the spot,” Liu said. “I'm kind of mad that I popped my Axel (in the Free Skating), but overall I'm happy with how I skated,” she added.

Kurakova made an error on the combination in her Short Program but moved up from sixth to second with a strong Free Skating (193.56 points). Safonova delivered two clean programs to earn 190.29 points. Alexia Paganini (SUI) slipped from second to fourth place at 180.48 points, but got a quota place as did Anastasiia Shabatova (UKR) in fifth and Kailani Craine (AUS), who ranked seventh. 33 of the 37 entries competed for one of the six available Olympic quota places.

Germany’s Minerva Fabienne Hase/Nolan Seegert won the Pairs event on home ice, but they were not in the running for an Olympic quote place. Silver medalists Laura Barquero/Marco Zandron

of Spain and bronze medalists Karina Safina/Luka Berulava of Georgia earned the Olympic spots – the first ones for their countries in this discipline in history. It was a tough competition with only three spots available for 13 Pairs. The new team of Hailey Kops/Evgeni Krasnopolski (ISR) placed fifth and surprisingly grabbed the last ticket.

To the delight of the home crowd, Hase/Seegert put out two solid programs to claim the gold medal with 185.25 points. “Just to be on the ice again after such a long time was an incredible feeling,” said Hase, who missed months of training after rupturing her syndesmosis ligament in February. “We did not come her to win, we just were happy to be able to skate again.”

Barquero/Zandron impressed with strong Pair Skating elements and won the Free Skating. Overall they moved up from third to second at 181.61 points. ISU Junior Grand Prix Kosice silver medalists Safina/Berulava, who have been skating together since May, won the Short Program. However, they missed a lift and their death spiral in the Free Skating received no credit and they slipped to third at 178.16 points.

Kops/Krasnopolski moved up from seventh to fifth to get that last spot – after skating together only for three and a half months.

Turkkila/Versluis (FIN) dance to gold and ticket to Beijing 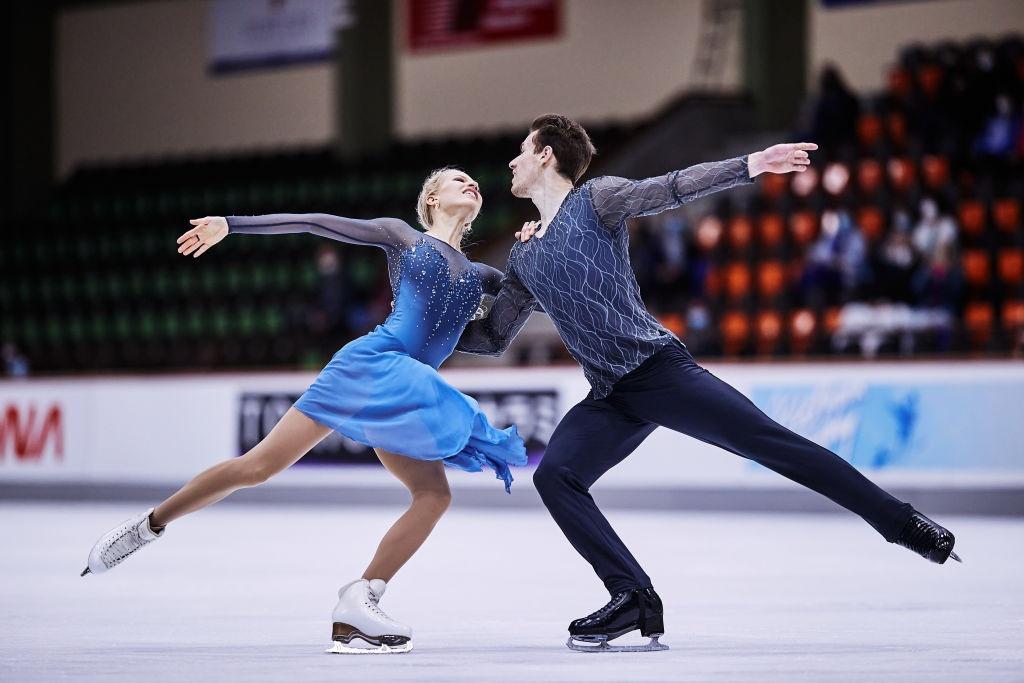 Juulia Turkkila/Matthias Versluis of Finland danced to the gold medal in Oberstdorf and collected a ticket to Beijing. Silver medalists Katharina Mueller/Tim Dieck from Germany were not competing for an Olympic berth, but Georgia’s bronze medalists  Maria Kazakova/Georgy Reviya were. The last two spots went to Armenia with Tina Garabedian/Simon Proulx Senecal in fourth place and to the Czech Republic, represented by Natalie Taschlerova/Filip Taschler who ranked fifth.

Performing to “Breathe You In My Dreams” by Trixie Whitley and “River” by Bishop Briggs in the Rhythm Dance, Turkkila/Versluis took the lead. They delivered a strong performance to “Wild Side” by Roberto Cacciapaglia and “Bruises” by Lewis Capaldi in the Free Dance to claim gold with 181.19 points. “After the disappointment at Worlds last season, we’ve worked really hard,” Versluis said. “Arriving at this competition it was less stressful, because of the good work we have done in the summer.”

Müller/Dieck stood in fourth place following the Rhythm Dance but pulled up to second with their “Bodyguard” Free Dance (173.74 points). Kazakova/Reviya made an error on the twizzles in the Rhythm Dance and placed fifth in this segment. With a powerful Free Dance to “Dummy” by Charlie Clouser, “Texas Gypsy Massacre” and “Mephisto's Lullaby” by Xtortion Audio, the 2020 ISU World Junior silver medalists moved up to capture bronze at 173.20 points.

The Ice Dance event featured 20 couples and 16 were aiming at one of the four Olympic spots.

The majority of entries for Beijing 2022 were assigned according to the results of the ISU World Figure Skating Championships 2021 in Stockholm (SWE): 23 for Men, 24 for Women, 16 for Pairs and 19 for Ice Dance. In order to have three spots, two entered Skaters needed to achieve a maximum of 13 points in Stockholm. In order to get two entries, the maximum number of points is 28. If there is only one entry, the maximum number of points for two spots is 10 and the maximum number for three spots is 2. Skaters who are in the Free Skating/Free Dance and are placed 16th and lower count with 16 points. Skaters who did not reach the Free Skating/Free Dance, get 18 points.

However, if an ISU Member has earned the necessary points for three spots or for two spots but did not have three or two Skaters qualified for the Free Skating/Free Dance, the third / second entry is not automatically attributed nor is it reserved for the respective ISU Member. They had the possibly to secure that third/second spot at the Nebelhorn Trophy. The ISU members were not able to send a Skater or Couple to Oberstdorf that competed in the Free Skating at the ISU World Championships 2021.

For more details on the Olympic entries and quota places please see ISU Communication 2388. For full entries and results of the Olympic qualifying competition, please see the Nebelhorn Trophy event page. The event was live streamed via the German Figure Skating Federation.

Subscribe to the ISU Press Releases and Newsletter to receive the latest information from the ISU.