Figure Skating is one of the few sports where music is a very important part of the performance. Therefore, finding the right music, arranging and designing it in a way that suits the athlete and the program perfectly is not always an easy task. The music selection is usually the first step in the process of making a new program.

“In my current experience, when you start to do something, you start by research,” said Latvian Skater Deniss Vasiljevs. “You don’t start by: Oh, I like it, let’s do it. It really needs a theme, you choose the angle you see it and you are shaping it not by one single minded straight line, but you start by basically finding the way how to approach it,” the 2022 European bronze medalist added.

“The selection of music comes from a combination of things such as the choreographer and the Skaters both bringing ideas to the table,” 2022 World Pairs Champion Brandon Frazier (USA) states. “Sometimes it can be a very difficult process on selecting music, lots of time is spent searching for the right music. Often times I find it helpful to play music you are thinking of using on the ice and do some elements and stroking to it to see if there is a natural fit.”

Most Skaters pick their music together with their coaches and choreographers, considering suggestions from different sides. Some Skaters are more involved than others into this process and actively search for music themselves while others rely mainly on their choreographers' recommendations. Or they sometimes even ask their fans to send them ideas. “It is difficult to find the right music for us, because the music we like and our skating rhythm are different,” admitted World Pairs silver medalist Riku Miura of Japan.

“For Pairs Skaters some challenges we can face is picking a piece of music that both Skaters feel equally passionate about,” Frazier pointed out. “Although we are a team we are two different individuals that may have different tastes in music. It can take a lot of time to find the right piece that both Skaters feel equally confident about and that they know that specific piece can bring out the best in their skating.”

Once you have an idea for the music, you need to have it cut or arranged according to your needs and this is where people like Hugo Chouinard and Karl Hugo come into play. The Canadians call themselves the “musical tandem” and they are producing about 2 000 programs per season. At the Beijing 2022 Olympic Winter Games, 31 Skaters/Couples had their music edited, arranged and/or created by Chouinard and Hugo, among them Olympic Champions Nathan Chen (USA) and Gabriella Papadakis/Guillaume Cizeron (FRA) as well as Alexa Knierim/Brandon Frazier (USA) who went on to claim the World title.

“Each project starts with an inspiration,” Chouinard shared. “Sometimes they (the Skaters or coaches) have a concept and ask me to suggest pieces that will allow them to tell their story on the ice. Sometimes they already have chosen parts and I should help them to find music to complete it. Some give me very precise instructions while others give me a lot of artistic freedom. Sometimes they make a basic edit themselves and ask me to redo it professionally.”

“The new tendency is the (special) composition,” the skating music designer continued. In the past five years it became more and more popular to have a very individual, especially composed music", he observed. This means the musician and composer Karl Hugo creates a piece to complete the program or even writes music for the whole program. “Whether it is a part or the whole program, this gives the athletes the chance to set themselves apart in a unique way,” Chouinard noted. 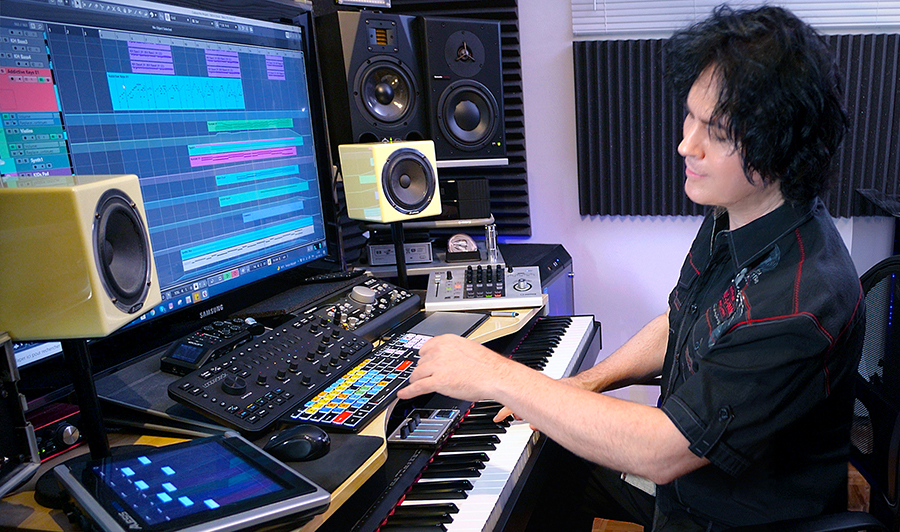 There is more to music editing for a Figure Skating program than just make sure it has the right length. “The structure must be carefully crafted to create a curve of emotion and energy that will make the program both captivating, aesthetic and optimized to enhance the performance,” the skating music designer pointed out. “The placement of the elements will have an impact on the editing, because musicality is rewarded. The duration of the musical phrases is adapted to the duration of the elements and often there are strategic moments planned to allow athletes to recover physically. A good musical design has the potential to improve the score.“

Once the music of a program is produced, it does not mean that the work is over. “Some edits need only one version while others continue to evolve during the season and can have more than 60 versions,” Chouinard said. Mostly this happens in Ice Dance. “Every second is thought out and adjusted to achieve optimal comfort and fit. It's a bit like fitting a costume.” As a former competitive Ice Dancer and ISU World Junior Championship competitor, the skating music designer understands these needs very well.

The quality of the sound is another important aspect. If the quality is poor, the music will not sound good and this will affect the program and hence the performance in a negative way. Ever since he started editing music back in 1993, Chouinard has been working on improving his techniques. “During the first ten years, I have spent a lot of time in arenas to develop the recipe to maximize the sound quality in a complex acoustic environment,” he shared. “This aspect is often forgotten, but even if the edit is successful, it still should have the perfect sound in competition. Each detail counts as the music never should waste a memorable skating moment but rather be used to create the magic.”

Creating the magic – this is what each Skater hopes to achieve, with the perfect music, the perfect choreography, the perfect program. So they keep looking for the right vehicle. There is so much music out there, but even with lyrics being allowed not only in Ice Dance but for Singles and Pair Skating since 2014, there are some pieces of music that are heard in the ice rink of the World over and over again – just think of “Carmen”, “Four Seasons” or “Pirates of the Caribbean”. However, there is always the chance to find a new arrangement and version that makes an old skating music “warhorse” sound fresh.

"One reason is - those music pieces let's say that are classics, there is a lot to learn already from previous people and as well choreographers that have already choreographed it have more experience and will do a better job,” Vasiljevs mused. “They require a bit less of (research). The character is well explored so you aim for quality and the only way you can kind of make it stand out is by surpassing quality-wise, but that's quite difficult. From a creative standpoint, it is a bit sad that everyone goes for the same, in particular in Olympic years people like to go for classical themes. Classics is so powerful, it automatically draws attention."

He himself skated to “Romeo and Juliet” by Sergei Prokofiev in the Olympic season, which is a well-known music in Figure Skating. But he still made it stand out. “I did not live this program, I retold the story. And that is what brings the difference from the common approach. That is what gives life to the program itself. At least in my mind this is the essence of doing something that many did before in your own way,” he said.

“I think that famous music is loved by many Skaters and used by many Skaters because it stays in people's hearts and resonates with them,” Riku Miura commented. Frazier agreed: “It is very common to skate to music that has been used for years in our sport. I think that is a great example of what the artistry in our sport shows. No matter if the song has been used before, each Skater has the ability to make their own art form of that particular piece with their version of skating. The song may be the same but the display, meaning, and story that one Skater can tell with their own skating can be completely different.”

Skaters sometimes have a music on their mind that they would love to skate to, but have not yet, for various reasons. Maybe they feel not ready for it or they are waiting for the right moment to try something that is new and different for them. "I do not like rap, but still there is not necessarily rap music, but music that goes closer towards it but it still has a nice fluidity, let's say musicality. I was trying to dance just for myself. I would love to explore that a little bit because I never got serious about it. That is something I would love to try and I have never skated," Vasiljevs reveals.

“One piece I always wanted to skate to was "Fix You" by Coldpla. This past season I had the opportunity to finally skate to the song and I was so grateful that Alexa enjoyed the idea of skating to it as well,” Frazier said. “Especially to perform that piece at the Olympics was better than I have ever hoped. I also have been eager to skate to a Beatles medley,” he added.

As the preparation of the season are well under way for most Skaters, they have selected their music. Some announce their music on social media or in interviews while others like to keep it a secret for a little longer. In any case to choose the music was an important step towards the new season. However, Chouinard and Hugo are still busy in editing, designing and creating. “The choice of music is a crucial step which will have a major impact on the performance and on the appreciation of the public and of course the officials. I believe that most musical styles can become the backdrop for a performance as long as the athlete is inspired and has emotions while listening to it. If the music makes us vibrate, we can express it and make the crowd feel it. It is essential to make choices that will showcase the skills of the Skaters,” Chouinard concluded.

Season Preparation: Getting Your Body and Mind Ready