Russia returned in style to the ISU Junior Grand Prix of Figure Skating circuit 2021/22 at the third event of the series in Kosice (SVK). They collected a total of nine out of 12 medals, including gold for Kirill Sarnovskiy, Veronika Zhilina and Pair Skaters Anastasia Mukhortova/Dmitry Evgenyev. Ice Dancers Natalie d’Alessandro/Bruce Waddell (CAN) broke through the Russian phalanx to snatch gold.

Sarnovskiy stood in third place following his Short Program to “Come Together” as he stepped out of his triple Axel and slightly underrotated the triple Lutz-triple Toe combination. However, the 15-year-old from Moscow turned in an excellent performance to “Game of Thrones” that featured two triple Axels as well as five clean triples. Only one Lutz was a little underrotated. Sarnvoskiy scored 215.96 points to strike gold in his first international competition.

“Today in my performance I liked everything, but this is not yet the end of my work. I would like to add the quad Salchow and quad Loop to my program,” he said. “Veronika (Zhilina, his teammate) and I are very pleased with our performances, with the work we’ve done with our coaches. Most of all we are happy with how we skated, we skated clean, we fulfilled the task we were given,” he added. 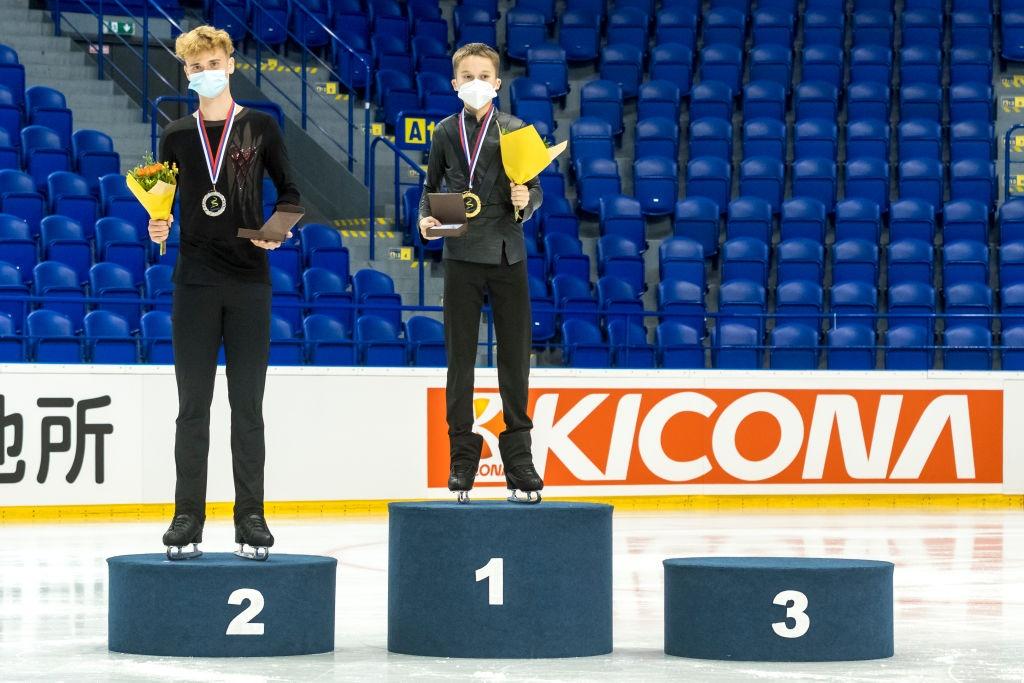 Yablokov was second after the Short Program and kept this position in the Free Skating. The Muscovite produced seven triples, but he slightly underrotated the quad Toe and popped the planed quad Loop into a double (207.39 points). Annis won the Short Program with a flawless program to “Wake Me Up When September Ends” that included a triple Axel and triple Lutz-triple Toe combination. The American struggled with some jumps in the Free Skating and slipped to third at 204.60 points. He went for a quad Loop and rotated it, but stumbled on the landing.

Veronika Zhilina led the Russian Junior Women to a podium sweep and landed three quadruple jumps on her way to gold. The tiny 13-year-old put in a flawless Short Program to “Seven Nation Army”, but was edged by teammate Sofia Muravieva, who had the same jump content – double Axel, triple Flip and triple Lutz-triple Toe – but picked up a level four for all spins and the footwork in her routine to “Ne me quitte pas”. Skating to “Love Story”, Zhilina landed a quad Toe-triple Toe and quad Toe-double Toe as well as a slightly underrotated quad Salchow and four triple jumps. She racked up 216.92 points – and her score would have had her first in the Junior Men’s event as well. “I like all quads and I want to show what I can skate my programs clean without any errors,” the young Skater commented. “We really liked the city of Kosice and Slovakia. The organization and the ice rink were excellent and thanks to the fans for their support. Now we return home and want to work even harder. We have serious tasks ahead,” she continued. 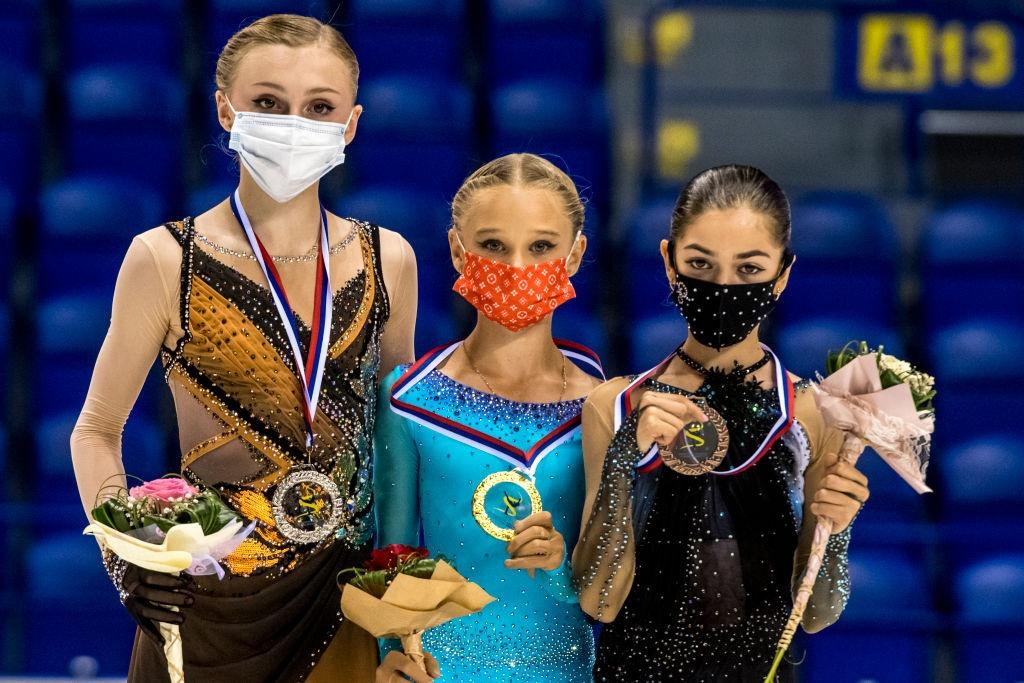 Muravieva turned in another clean performance to “The Great Gatsby” soundtrack that was highlighted by seven triples to finish second at 208.25 points. Adeliia Petrosian (RUS) claimed the bronze with two strong programs. She went for a quad Toe that was a little wobbly and slightly underrotated (201.21 points).

Anastasia Mukhortova/Dmitry Evgenyev (RUS) earned gold in the first Pair Skating event of this year’s ISU Junior Grand Prix of Figure Skating series. The Muscovites took the lead in the Short Program to “El Choclo” and “Tango de Roxanne” that included a nice throw triple Salchow and a level-four side by side combination spin. Mukhortova/Evgenyev’s Free Skating to a Frank Sinatra Medley was highlighted by excellent throw jumps and strong lifts, but they had some issues with the side-by-side jumps and they did not receive credit for the pair combination spin. Nevertheless, the couple ranked first in the segment and first overall with 171.99 points.

“The field at this Grand Prix was quite deep. But that didn’t mean anything to us, because our job was to do everything we can do and not to think about our placement and about the points we collect. We wanted to enjoy our skating and wanted the judges and the spectators to enjoy it as well,” Evgenyev said. “I focused on the performance like on a normal run through of our program. I told myself, we can do all this and I had no doubts. Our practices here went quite well and this gave us even more confidence,” Mukhortova explained. 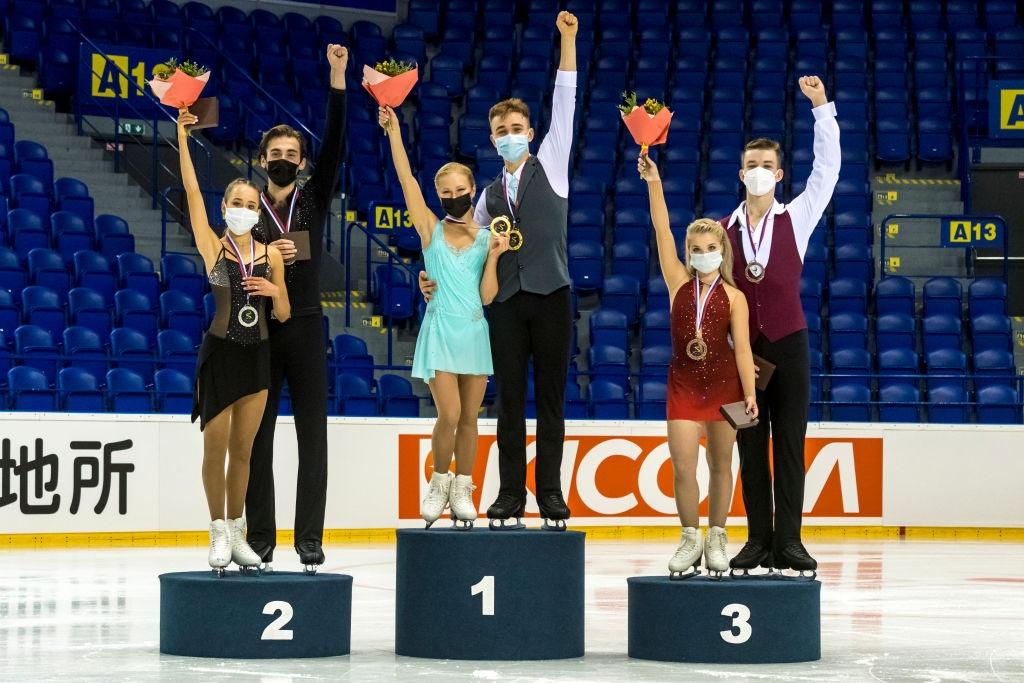 Karina Safina/Luka Berulava gave Georgia its first Pair Skating medal at an ISU Junior Grand Prix of Figure Skating event. The couple that is skating in their first season together ranked third after the Short Program, but moved up to second with a solid performance that included a level-four triple twist and level-four lifts. However, they went for a double Salchow and double Lutz as solo jumps and throw double Salchow and throw double Loop (168.26 points).

Dancing to “Pulp Fiction” and “The Good Wife” soundtracks in their Rhythm Dance, D’Alessandro/ Waddell picked up a level four for the first Blues pattern, the twizzles and the stationary lift. But the second Blues pattern was graded a level one and the Canadians were less than half a point behind Kaganovskaia/Angelopol, who earned a level four and level three for the Blues pattern dance. In their dramatic “Swan Lake” Free Dance, D’Alessandro/Waddell completed four level-four elements and overtook the Russian couple with total score of 163.04 points. “We said we wanted to come here and win and now that that has actually happened, that’s pretty crazy, pretty exciting that we were able to take the feedback that we got (at the Skate Canada training camp in Kingston) and come here and apply that and just keep improving,” D’Alessandro shared. “Just taking the year and a half off with Covid we didn’t have many competitions, but it honestly made us hungrier and more excited to come out here and perform and just show our improvements,” she continued. 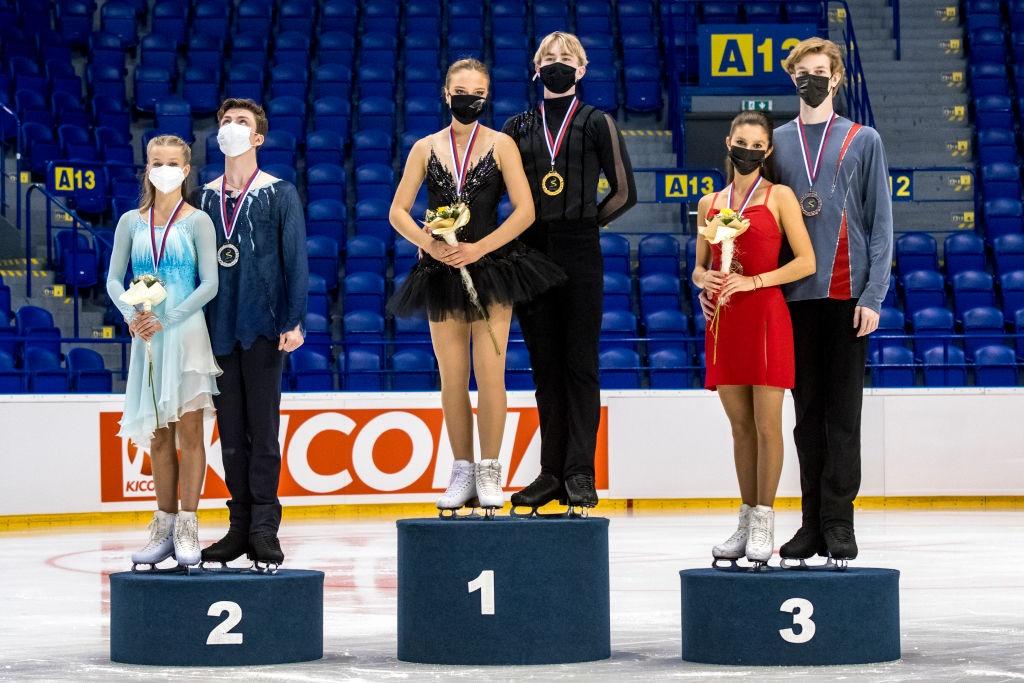 Kaganovskaia/Angelopol delivered a captivating performance to “Ave Maria” performed by Thomas Spencer-Wortley and had the same technical difficulty as the winners. However, a knee sliding move in their choreographic step sequence of them both was considered a fall and they lost a few points to finish second (160.72 points).

A total of 102 Skaters/Couples representing 28 ISU members competed in the third ISU Junior Grand Prix of Figure Skating event of the season.

The ISU Junior Grand Prix of Figure Skating Series continues in two weeks in Krasnoyarsk (RUS). The ISU has an anti-Covid protocol in place to keep all participants of the events as safe as possible.

In Focus: The best pictures of the ISU Junior Grand Prix of Figure Skating - Courchevel 2 (FRA) 2021