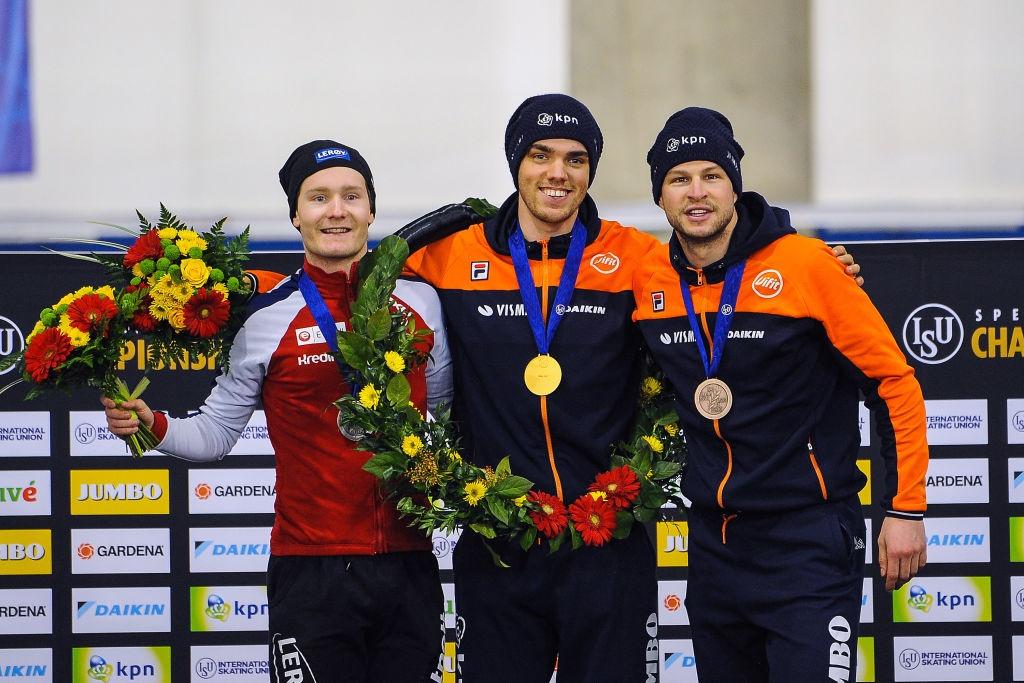 Patrick Roest (NED) successfully defended his World Allround title, setting a points world record on his way to golden glory in Calgary, Canada, on Sunday. The Dutchman’s total of 145.561 points broke the 2006 mark of 145.742 by Shani Davis of the USA. Norway’s Sverre Lunde Pedersen put up a good fight, but eventually had to settle for silver, while nine-time champion Sven Kramer (NED) took the third World Allround bronze medal of his distinguished career.

Pedersen sets the early pace in the 1500m

Heading into the second day of the tournament, Roest held a 0.88-second gap over Sverre Lunde Pedersen in the 1500m.

The two main contenders faced each other in the final pairing and Pedersen made amends for his collapse in the final laps of Saturday's 5000m.

Pedersen and Roest took first and second place in the distance, while Kramer came third in 1:43.87 to hold on to bronze-medal position in the overall ranking too.

The nine-time champion skated in no-man's land, with the two top spots on the podium out of sight and his fourth ranked team-mate Douwe de Vries (NED) too far behind to realistically challenge for the podium.

"Sometimes the head thinks differently than the legs"

Pedersen had to provide a though target for his Dutch rival in the final event, the always challenging 10000m, where he skated in the penultimate pairing against De Vries.

Despite still feeling the effects of his 1500m efforts, Pedersen skated a balanced race to finish in 12:56.91.

"I tried to skate 30.8 or 30.7 laps, which may have been a bit too slow in the beginning but I managed to keep the lap times pretty flat and I did not have anything left at the end. I was satisfied with the time,” he said.

Team-mates Roest and Kramer faced each other in the final pairing, with the 23-year-old Roest defending a 4.54 gap over Pedersen.

The title defender was behind Pedersen's schedule in the first eight laps, but went on to skate faster splits to secure his title and win the distance in 12:51.17. Clocking 13:00.93 Kramer finished fourth.

"It was good for me to skate the 10000 with Sven [Kramer],” Roest said. "He had to wake me up. Sometimes the head thinks differently than the legs should do. At some point Sven accelerated and I had to follow."

Home favorite and Olympic Champion Ted-Jan Bloemen (12:53.15) came second in the final distance, behind Roest and three seconds ahead of Pedersen. The Canadian ended up fifth in the final ranking, while Kramer took bronze overall.

"That's nice, but of course it’s not what I came for," the nine-time champion said.

"I could see this coming after I blew my 500m yesterday. The rest of the tournament was good, but it's not consistent enough. That reflects my whole season.

"I have to get rid of that inconsistency and that's something to work on for next season."

Roest rules roost at end of World Allround Day One