The end of one chapter is the beginning of a new one. This is certainly true for U.S. Pair Skaters Alexa Knierim and Brandon Frazier, who started their career as a team a little over a year ago after their long-time partners retired.

It was not an easy step to start from zero basically. Knierim had won two National titles, claimed bronze in the team event at the PyeongChang 2018 Olympic Winter Games as well as two medals at the ISU Four Continents Championships and competed in five ISU World Figure Skating Championships with her husband Chris Knierim when he decided to retire in February 2020. Frazier and his previous partner Haven Denney were National Champions in 2017 and ISU World Junior Champions in 2013. They participated as well in ISU World and Four Continents Championships. 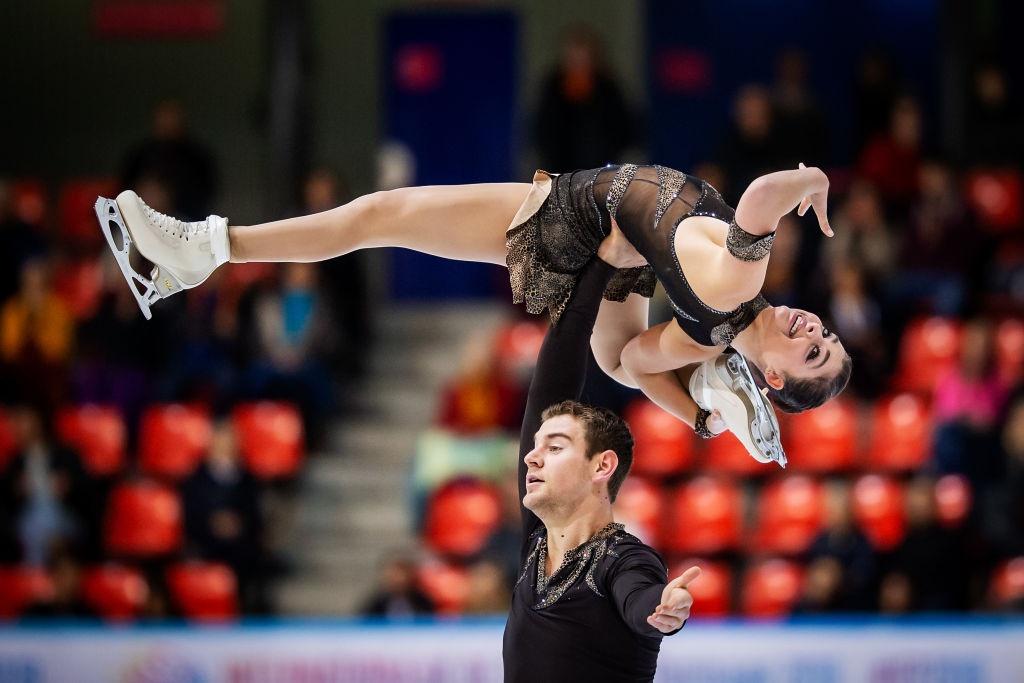 When Brandon’s partnership ended, he was leaning towards retirement. But when he saw that Alexa was looking for a new partner, he decided to give it a try. “It was not easy,” he admitted. “With Haven we have known each other a whole life, most of our skating career. You establish a connection when you're out there and you are competing. And that always grows into a strong bond. Whenever that chapter ends it can be pretty emotional in general for even when it was time to move on. It was difficult at first but everything does happen for a reason and the timing was exactly where it needed to be. I was very grateful for the journey I had and it has helped me to move on to what's in front of me now. That journey will always hold a special place in your heart.”

Alexa, who wanted to continue when her husband stopped, agreed: “When you look at the past it is going to have a special place in your heart that nothing can replace or change but you still can build new, special memories after that and it won't take away from what you had before.” She and Frazier pointed out how supportive Chris Knierim is. He is helping to coach them and he and Brandon get along very well. The Skaters go back a long way, they once started out together in Colorado Springs.

“One of those things I've learned from Chris and Alexa that I value so much is the way Chris supports Alexa when the journey ended for them and I started skating with her. It is the most genuine, authentic love and support,” Frazier noted. 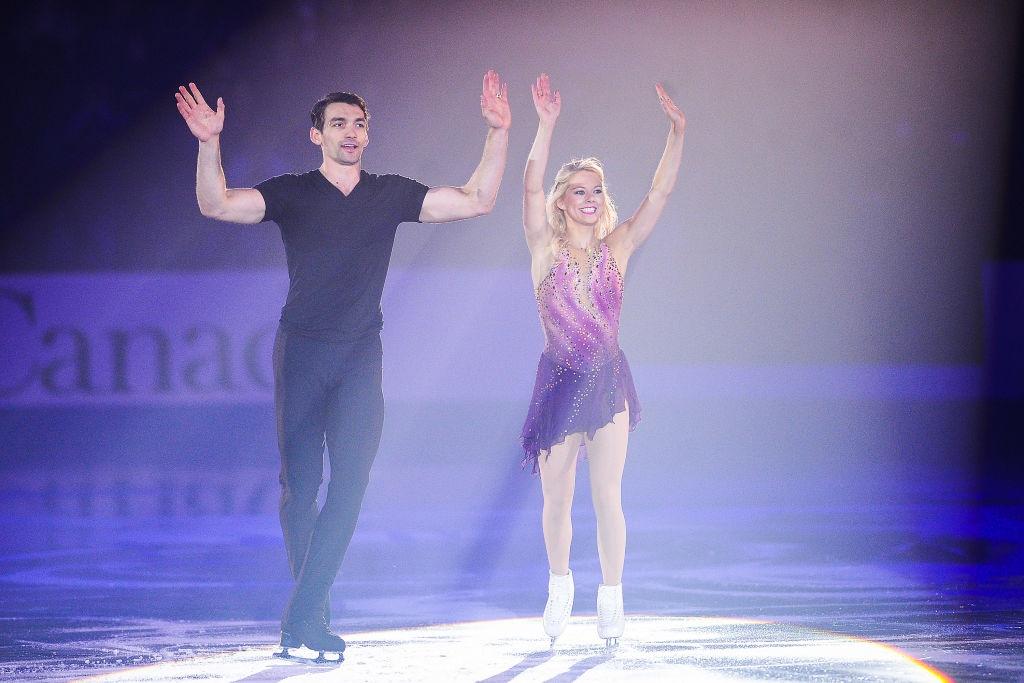 The Pair was able to start training last summer and success came quickly. However, although both were strong and experienced Pair Skaters, it took a while to get there. “We knew when we teamed up people were going to expect just great, big elements, because we had them with our previous partners” Knierim explained “But when we first started trying things together, it was like two languages that are similar, but they are not the same and you can't quite understand everything but you kind of know. Specifically, the throws and twist took a long time to figure out. Brandon had to take on the role of changing his technique for the throws for my benefit and I was so grateful that he was able to adjust. We are fortunate to have Chris in the process, I think that’s what helped expedite the process of our success for the throws. Brandon also had to learn the throw flip because he only did edge throws. Some things that were easy were just skating together.”

The Skaters feel that the jumps and spins came easier to them as they had a similar pattern and technique. “I know I adjusted a lot on the throws, I was very open to it, but I was really proud of Alexa being open to new ideas with lifts and trying things outside maybe her comfort zone on the lifting portion,” Brandon said. “We both just work very well together and we utilize our experience with that particular element or that comfort zone to help each other and we're both very open to listening and adapting. We know when we work together things will click. So there's been a lot of give and take for both of us on certain elements.” 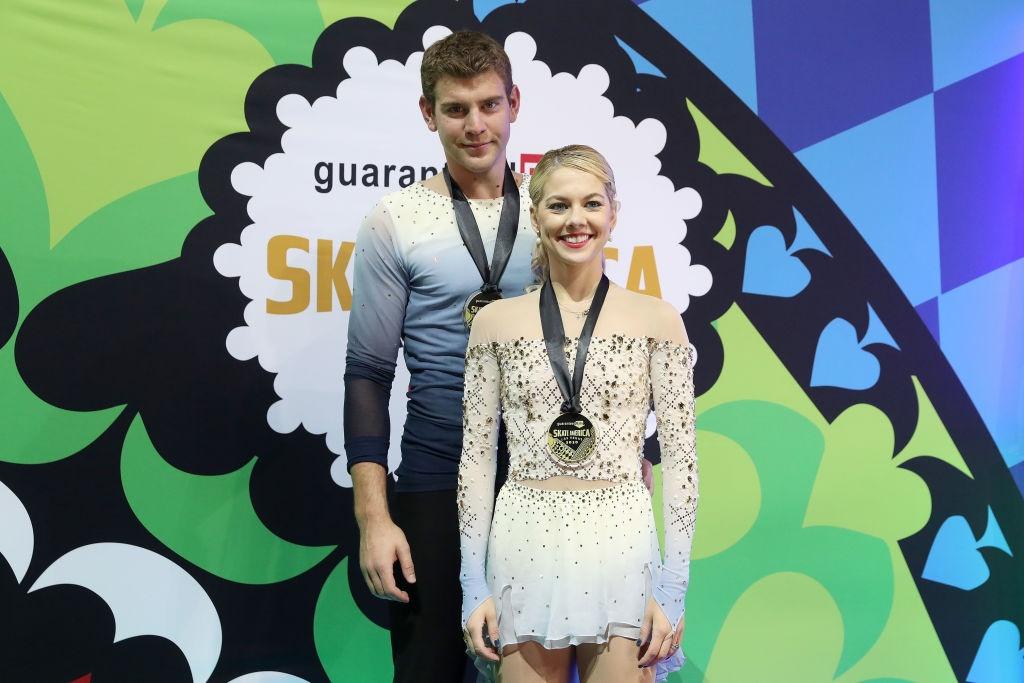 Knierim/Frazier struck gold at the domestic ISU Grand Prix Skate America 2020, their first real competition as a team, last October and added the gold medal at the U.S. Championships 2021 to it in January. Then they competed at the ISU World Figure Skating Championships in Stockholm (SWE) and finished a respectable seventh. 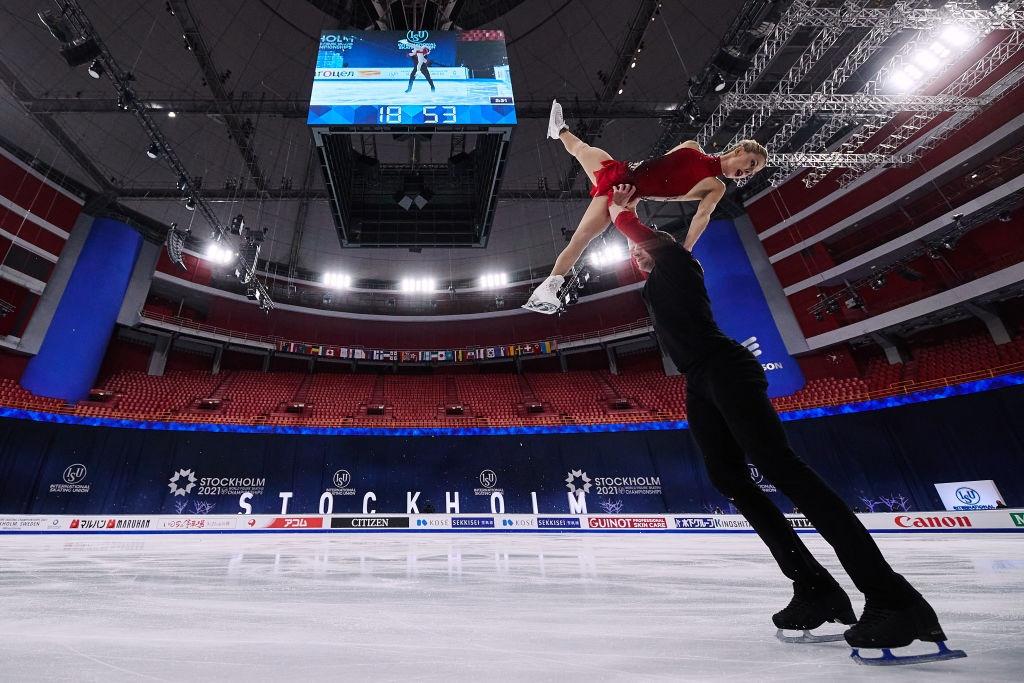 “Emotionally it was very exciting to be back at the World Championships. And then, to be there, with somebody new, who we both experienced such great competitions with prior in that season. We just went for the experience and enjoyed it,” Alexa shared. “We were a new team, we had to do our first (real) international (event) at the World Championships, so you're going up against the best teams in the world and I know there was a part of me that was just kind of enjoying the experience” shared Brandon “but there's also an eagerness to want to show off what we are capable of doing. And I think we have a lot of great things that we can do. So overall it was a really good learning experience to feel our new partnership, your new partner under that kind of spotlight and prepare a big season next year. I was proud of how we handled ourselves.”

Knierim/Frazier went on to cap off their season with a silver medal at the ISU World Team Trophy. After returning home and before going on vacation, they  started to work on their new programs.  “Our new programs are finished and we’ve begun training them to prepare for Cranberry Open in August. We are extremely enthusiastic about both programs,” Alexa said.  The Short Program is set to “House of the Rising Sun”. “It's branching off of the (previous) short to a whole other level, it is an exciting piece. Maybe we played with something in that genre, similar with our previous partners, but not exactly the same,” she continued. “A much more upgraded version with a new twist of a new style. It's going to fit our skating very well. It's going to be a good program,” Brandon added.

They chose to work with ISU Best Choreographer 2020 Award winning choreographer Shae-Lynn Bourne for the first time to work with them on that program. “She is incredibly gifted and has created a new freedom of skating within us,” Knierim pointed out.

Renée Roca, who did their programs in the past season, choreographed the Free Skating. “We adore Renée Roca and her creativity. Working with her last season set the tone for who we wanted to pursue our Free Program with for the Olympic season. We are skating to ‘Fix You’ by two different artists and one section composed by Karl Hugo from Studio Unisons. The combination of vocals from Fearless Soul and Coldplay allow for a delicate but exciting balance of energy,” Alexa shared.

The U.S. Champions are looking forward to start competing in the second week of August at the Cranberry Cup in Boston to get the Olympic season underway. “We would love the opportunity to timeline the season strategically with the hopes competing in February in Beijing,” Knierim noted. “So with that being said, you don't want to start too early in the year because you can get burnt out with the road ahead. But at the same time we would like to get as much experience and exposure as possible. So you will definitely see us trying to participate in the senior be Challenger Series, as well as in the Grand Prix.” The couple has been selected for the ISU Grand Prix of Figure Skating events Skate America and Internationaux de France.

The Skate America Champions have their eyes set firmly on Beijing 2022 so watch this space.