Dutch ladies sweep the board on final day in Heerenveen 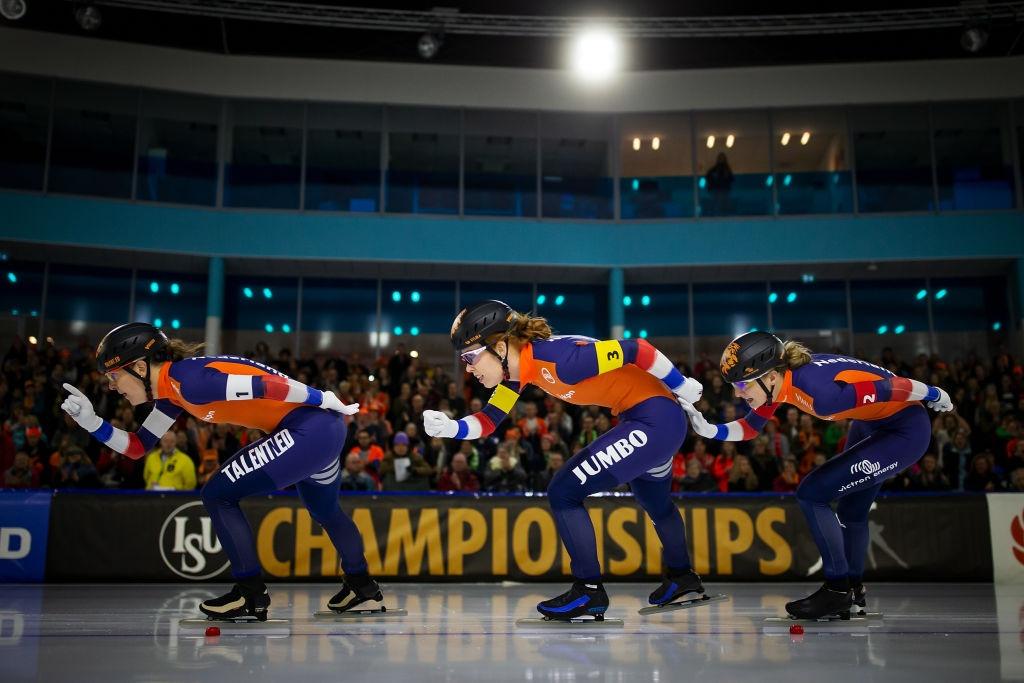 De Jong, Wüst and Wijfje retained the Team Pursuit title by more than a second from their Russian rivals © International Skating Union

The Dutch ladies recorded a clean sweep of gold medals at the ISU European Championships in Heerenveen on Sunday. Antoinette de Jong, Ireen Wüst and Melissa Wijfje started the final day retaining the Team Pursuit title for the Netherlands. Jutta Leerdam added the 1000m gold with her first major international title, and Irene Schouten wrapped up the day seizing mass start gold, with Wijfje bringing home the bronze in the same event to put a cherry on top of the orange cake.

The Dutch ladies took on Russia in the second of three pairings in the Team Pursuit and they left no doubt as to which was the stronger team. Wüst, De Jong and Wijfje gained a couple of tenths of seconds at each 200m split during the first 800 meters and maintained their advantage throughout the rest of the race to finish in 2:57.97.

De Jong (NED) was relieved. "Finally I got off the ice with a good feeling, which is positive for me after the past couple of weeks [in which she failed to qualify for an individual event at the European and World Championships],” she said.

"It was difficult to have to wait for a whole weekend. Of course I wanted to start in the individual distances too, but for me personally this is a nice boost.

De Jong rated her Team Pursuit medal lower than she would have done with an individual medal, but she still took the event very seriously.

"People may say it's a circus act, but this is a real event. It's been there for a long time, it's on the Olympic programme every four years."

Russia's World Cup-winning trio of Elizaveta Kazelina, Yevgenia Lalenkova and Natalya Voronina also took the event seriously, but they couldn't keep up with the home team and had to settle for silver in a time of 2:59.04.

Kazelina was satisfied with their performance. "During the race I felt that this was one of our best races, but the Dutch team was very strong. All of them are in good shape. But the gap is not so big. We will work to close the gap,” she said.

Belarus turned out to be best of the rest. Skating 7.49 seconds slower than the Dutch ladies, Marina Zueva, Yeugeniya Vorobyova and Tatyana Mikhailova reeled in the first ever medal for Belarus at a European Championships. Poland fell 0.25 seconds short of the podium. 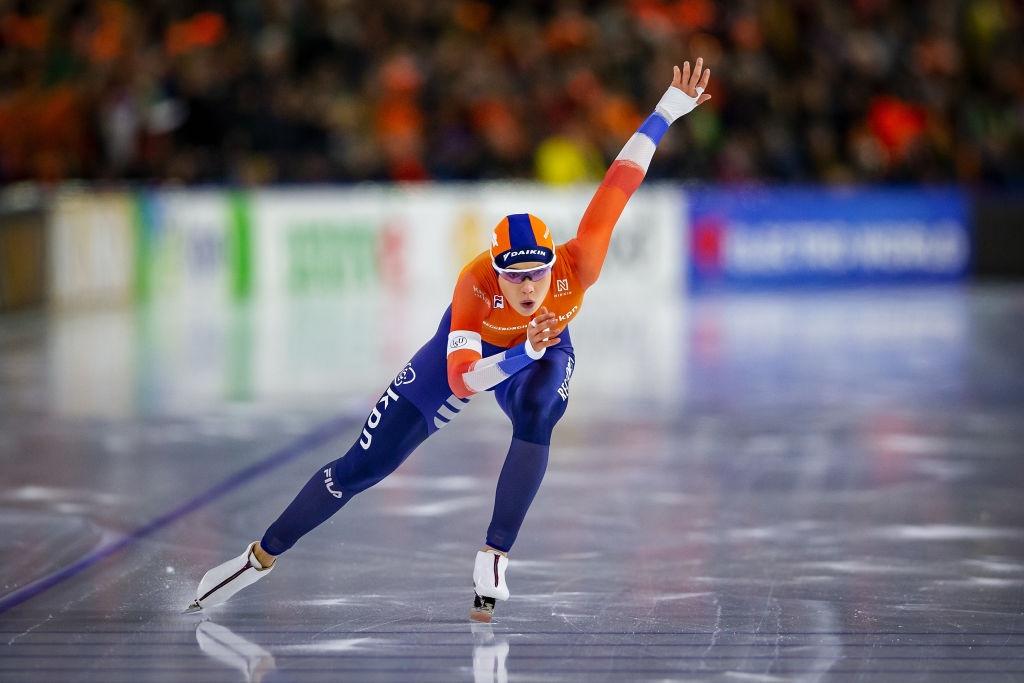 Jutta Leerdam (NED) also had to sit and wait for the whole weekend before taking to the ice, but for different reasons: her coaches told her not to skate Friday's Team Sprint and Saturday's 500m because of a groin injury.

Her patience was rewarded on Sunday with her first major international title. The 21-year-old sprinter hammered out a personal best of 1:13.67 beating pair-mate Daria Kachanova (RUS), who also skated a PB of 1:13.90.

The two moved to the top of the leaderboard with just two more pairs to come and none of the final four skaters were able to come close to their times. Yekaterina Shikhova (RUS) had already set 1:14.48 in the sixth pairing to win the bronze medal.

Leerdam was not hampered by her groin during the race. She said: "It was a bit tricky because I could have worsened the injury. There is a small rupture in my groin muscle, but I wanted to take the risk because I knew I was good."

She did not know quite how good she was until she crossed the finish line, however.

"I felt that it was a good race, but I didn't know I went that fast. I heard the speaker saying that I was a second ahead [of the fastest time so far]. I wanted to gain more or at least keep the advantage, but it was really messy in the final 50 metres.

"If I hadn't had that mis-stroke on the final stretch I might have skated a track record. That's a pity, but I'm super happy with the title."

Schouten wins 'by the book' 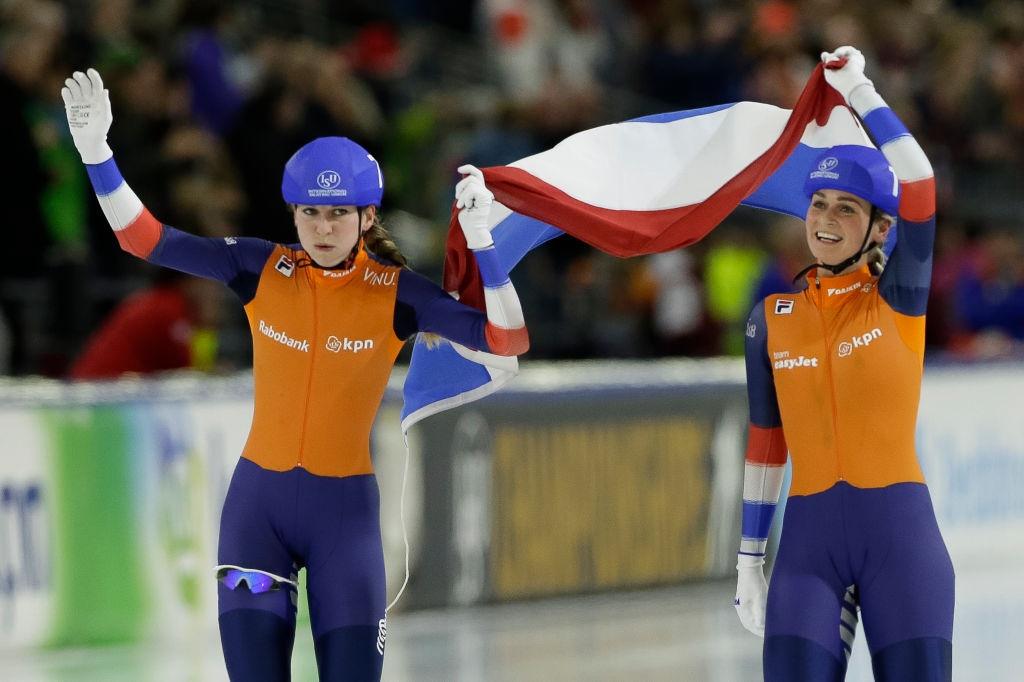 Irene Schouten (NED) already has having two World titles in the mass start to her name, but sealed her first European title on Sunday, dethroning Francesca Lollobrigida (ITA).

Schouten thanked team-mate Melissa Wijfje (NED), who controlled the first half of the race and almost ran away with the title herself. With four laps to go Wijfje decided to attack all by herself and stayed ahead, only to get caught by Schouten and Lollobrigida in the final few meters.

"This one was by the book," Schouten said. "Everything went according to plan and to take not only gold, but bronze too, in front of this crowd in Thialf, that's just awesome."

Wijfje was happy not just to have contributed to Schouten's win, but also to win a medal for herself.

"I've helped with many of Irene's victories and those feel like victories for me too, but winning a medal myself is even better. This is bronze with a golden edge."

Wijfje admitted she had attacked with the intention of going for the win herself. "You always have to believe that when you attack," she said.

Schouten waited to see how things developed in the bunch. "I relied on my experience and I saw the gap closing in a little. If I would have held back any longer, the Italian [Lollobrigida] would have reeled her in."

On the final straight, Schouten sprinted to victory with Lollobrigida following her lead. Both skaters passed Wijfje, who secured the bronze just ahead of Russia's Kazelina.