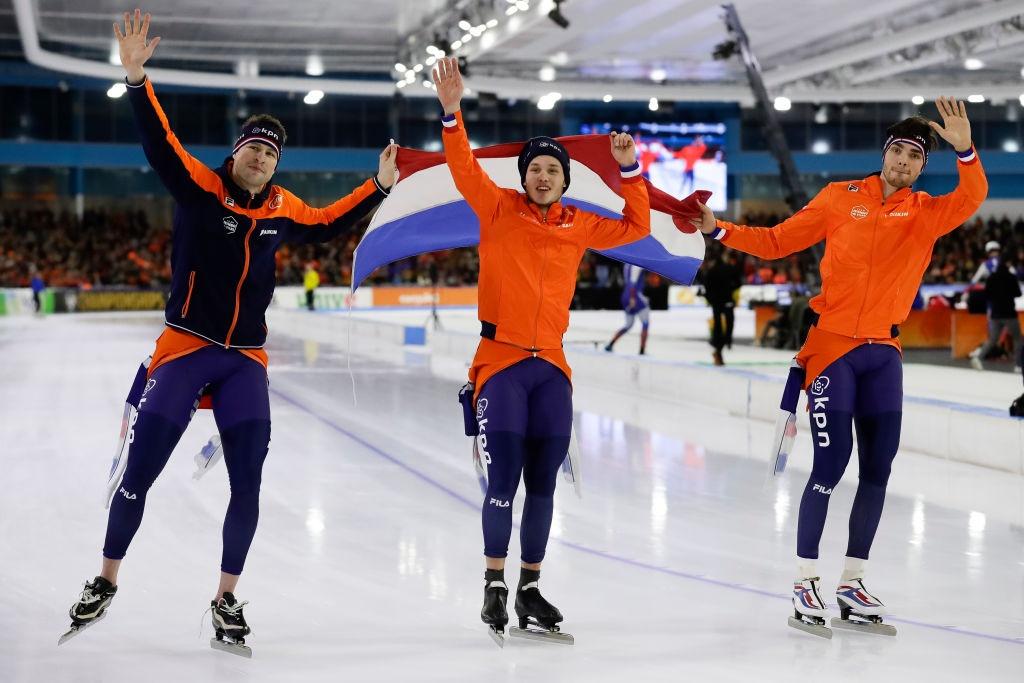 Bart Swings (BEL) broke the mold in the final event of the ISU European Speed Skating Championships in Heerenveen. Before the men's Mass Start all 13 titles had gone to the Netherlands or Russia, but in the final event Swings won an historic first ever international speed skating title for Belgium.

Earlier on Sunday the Netherlands had taken Team Pursuit gold and Pavel Kulizhnikov (RUS) had retained his European 1000m title with a spectacular track record.

In the first men's event of the day, the Dutch pursuit team of Marcel Bosker, Sven Kramer and Patrick Roest beat Norway in the second of three pairings, setting a championships record of 3:40.63.

Bosker, who had not skated any individual distances in Heerenveen, led out the last lap to drag Roest and Kramer to the line. He said: "Sven and Patrick did not have the best of legs, which didn't come as a surprise already having skated one [Kramer] and two [Roest] individual events. Therefore I'm glad that I was able to pull those lap times down in the final part.

"We had planned it that way. They both took a 600m stint in the middle part, while I had done 400m beforehand to close with a 600m stint, and if you manage to take the lap time down by 0.6 seconds in the final lap, that's well done."

Bosker's final stint broke Norway. Sverre Lunde Pedersen, Håvard Bøkko and Hallgeir Engebråten managed to keep up with the Netherlands for half of the race, but eventually finished in 3:43.39, enough for the bronze medal.

Yuskov's last Team Pursuit appearance before Sunday's showdown had been at the 2014 Sochi Olympic Games. He was happy to be back: "I felt good, I'm in shape so it's great to skate the Team Pursuit," he said.

Semerikov, who had won the Team Pursuit World Cup with Zakharov as third man, welcomed Yskov back: "It was no problem to skate in a new line-up. The strongest skaters should skate and Denis has shown that he's a good skater before." 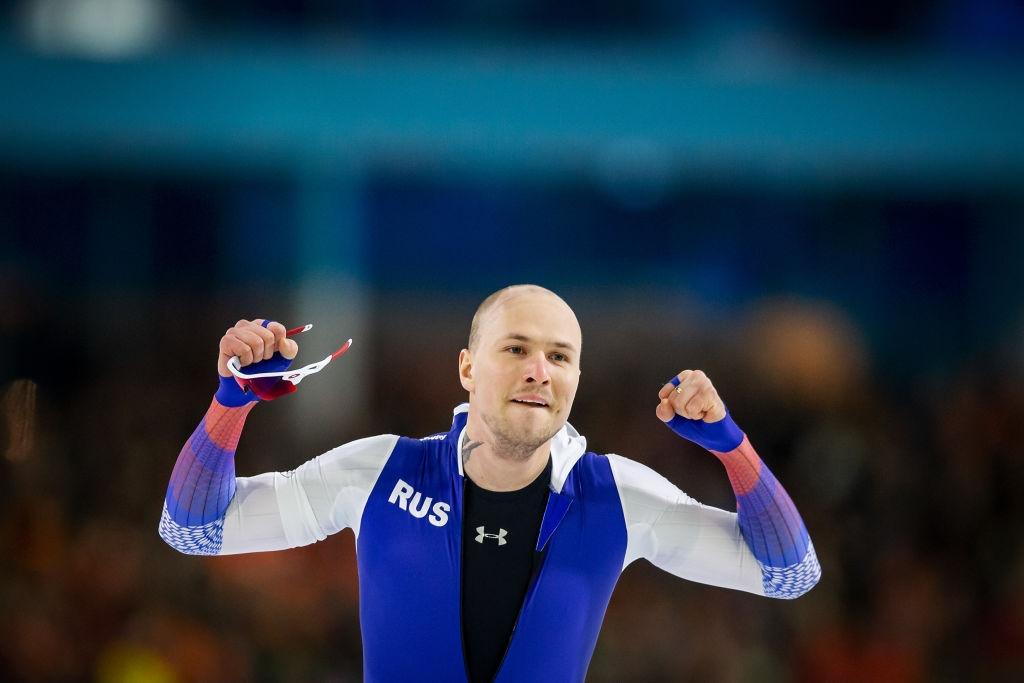 Kulizhnikov won his second individual gold and his third in total this weekend after the team sprint on Friday and the 500m on Saturday, in retaining his 1000m title on Sunday.

The Russian rocket hammered out 1:07.09 to break Duchman Kai Verbij's track record by 0.39 seconds. Kulizhnikov had the fastest opener at 16.24 and continued to clock a 24.84 first full lap. Apart from Thomas Krol (24.97) none of the other skaters were able to dip below 25 seconds in their first full lap.

No-one else was able to match Kulizhikov's final full lap of 26.01 seconds either. Again Krol came closest with 26.31, the Dutchman finishing in 1:07.82 to take silver and leaving world champion Verbij to settle for bronze in 1:08.38.

"I had sort of estimated that I would not be able to skate those times," Verbij, who went out in the final pairing, said, before paying due respect to Kulizhnikov: "He has outclassed us [the Dutch] today and it doesn't even look like he’s making an effort."

Kulizhnikov played down his record-breaking performance. "Before the race, I did not feel strong enough to beat the record. It was an intense weekend and I was tired after the Team Sprint and the 500m. I just decided to skate good, nothing special,” he said.

Krol, who had won Friday's 1500m, had mixed feelings about picking up the silver. "Not so long ago, skating 1:07 was quite something, you would have won any race doing that. And now I'm almost disappointed. Not with my own race, I skated my best time ever in Thialf [Stadium], but there was an indomitable Russian on the ice today," he admitted.

La Brabançonne rings out for Swings 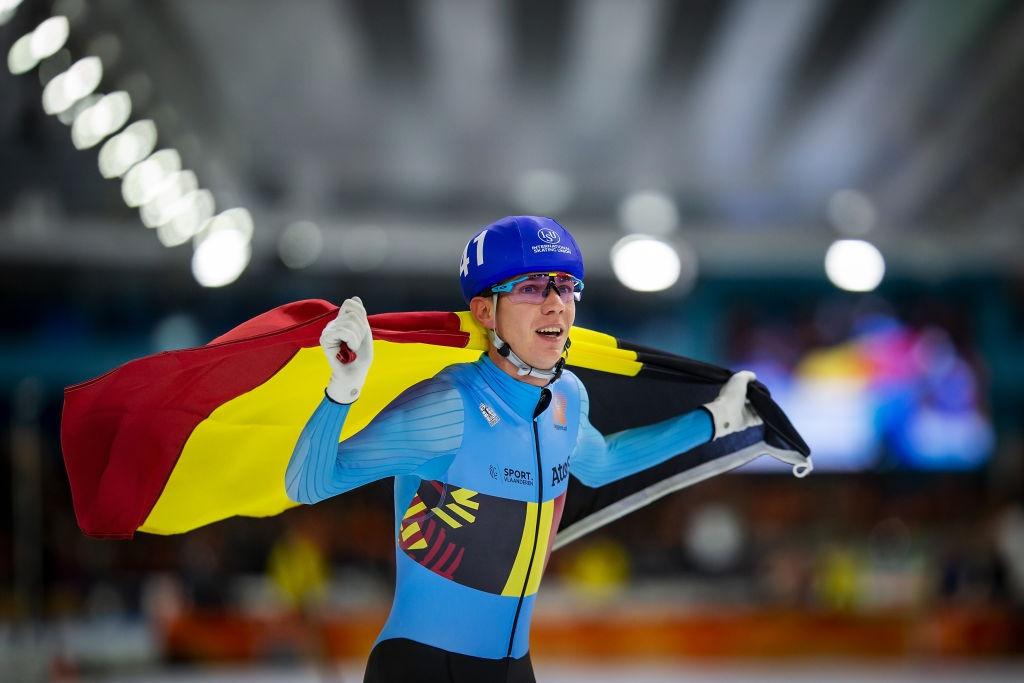 The joyful Thialf crowd had already heard the Dutch national anthem eight times and the Russian anthem five times since Friday evening when the men's mass start bunch entered the rink for the final event of the European Championships on Sunday. Never before had La Brabançonne, the Belgian national anthem, been played at a major international speed skating tournament. Bart Swings changed all that.

The Belgian silver medalist at the 2018 Olympic mass start had set his sights on the title and the race unfolded perfectly for him. "The speed was high [throughout the race] and therefore it was not easy for Jorrit [Dutch contender] Jorrit Bergsma to try one of his jumps,” he said.

"He had to close a gap with some six laps to go, but the pace did not go down afterwards, which again played to my advantage. For me it would have been a dilemma to chase or not if Jorrit had attacked with two or three laps to go. That would have cost me in a sprint with guys like Livio Wenger (SUI) and Arjan Stroetinga (NED)."

Italy's Michele Malfatti (ITA) tried to escape from the bunch, but was caught by the pack, led by Bergsma, with one lap to go and it all came down to a chaotic sprint in the final lap.

Swings was perfectly placed for the sprint, and kept Stroetinga at bay on the final straight. The Dutchman took silver and Semerikov claimed bronze.

"My first title on ice," Swings said. "It's my most beautiful medal after my Olympic silver. I started ice skating because of the Olympics [Swings is a multiple European and World Champion in inline skating], so that's definitely the most precious one, but winning gold means a lot too."

A disappointed Stroetinga agreed. "Silver is better than nothing, but it's also the first loser," he said. "In the penultimate corner I was well positioned behind Swings, but then Livio Wenger came in between and I lost contact a bit. At that moment I knew it was going to be difficult."

Dutch ladies sweep the board on final day in Heerenveen