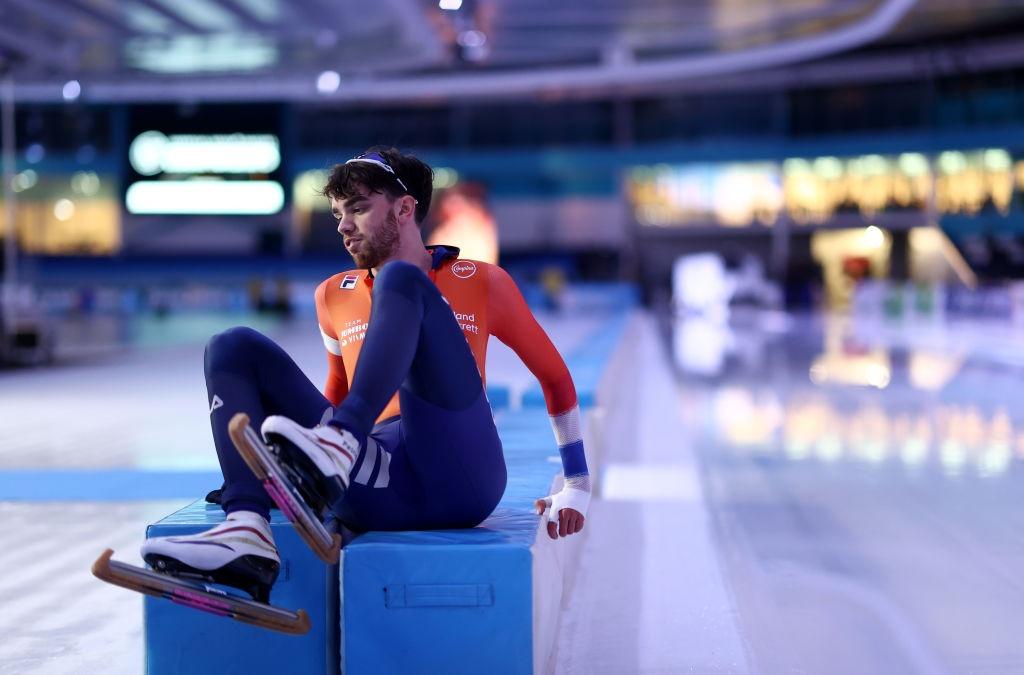 There was huge pressure on Pedersen and Engebråten, battling for the sole Norwegian Olympic 5000m slot in Heerenveen. Engebråten was the first to take on the ice in the second pairing.

“Before the race I was pretty nervous,” he said. “So far this season, it’s been pretty close (with Pedersen in the 5000m), so it was really nice to beat him and see that I had the level to compete with the best skaters in the world.”

The 22-year-old from Hamar finished in six minutes and 13.67 seconds to take bronze, more than seven seconds faster than Pedersen, who ended up ninth in 6:20.99.

The 29-year-old Pedersen, who had struggled to recover from a bike accident in the summer, was devastated.

“It’s easy to forget that I was in bed this summer, not even imagining I could be standing here now,” he said. “But still, I’m really disappointed that I did not manage to seize that Olympic 5000m ticket.” 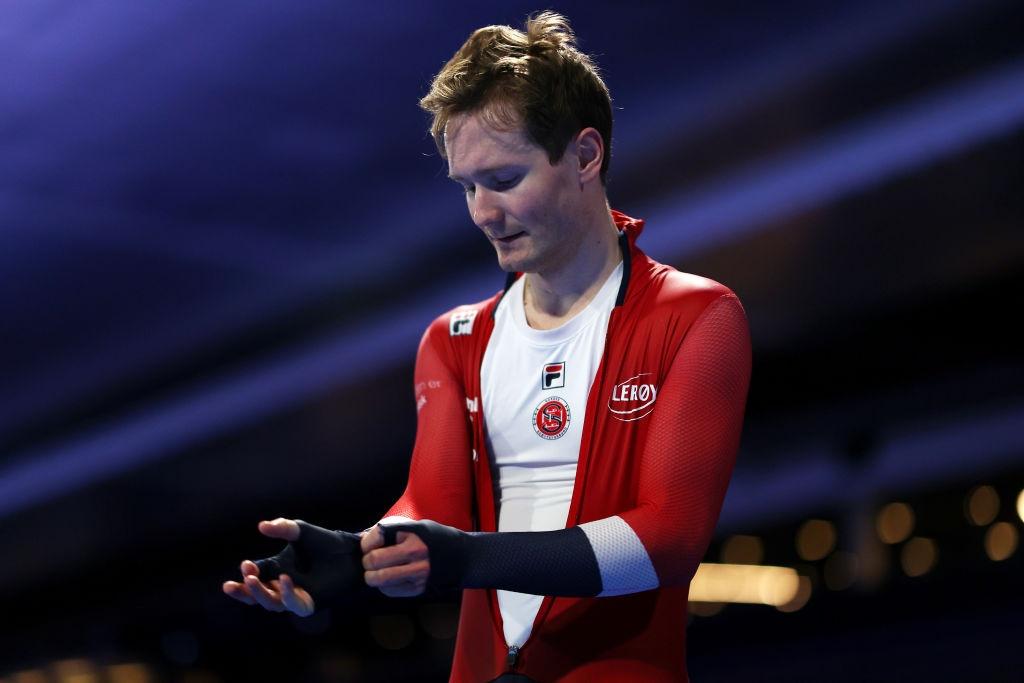 Pedersen will travel to the Beijing Games to defend Norway’s Team Pursuit title, and he will have to skate an individual distance in order to be eligible for the squad. Norway manager Bjarne Rykkje said no decision had yet been made about which individual event Pedersen will skate, but it will be either the 1500m or the Mass Start.

Roest and Bergsma winding down to gold and silver

In contrast to their Norwegian counterparts, Dutchmen Roest and Bergsma were winding down at the European Championships, having qualified for the Olympic 5000m and 10,000m.

When Bergsma entered the rink in the penultimate pairing, Engebråten still stood top. The Dutchman repeatedly hit split times just a few tenths slower than Engebråten’s but managed to make the difference in the final lap, finishing in 6:13.47.

“We really focused on the Olympic trials,” Bergsma said. “That was a tough period and I feel the backlash now. It was difficult to refocus for this race and, taking that into account, my time is not too bad.

“The race was not super bad, but not as steady as I would have wanted. Normally I would have had more left in the tank towards the end. I didn’t have that today, but that’s fine.”

Roest went into the race with a similar feeling. Knowing the times of Bergsma and Engebråten, he knew what was necessary for gold.

“I saw the other guys struggling. Therefore, I knew it would be dangerous to aim at that time. I decided to start a bit slower to explore what would be possible. In that case you can still step it up and win. If you start too fast, you might blow up and lose too much.

“Of course I always want to go faster, but this was as much as I could do today. To win a European title is beautiful, because it’s a title, but in the end it’s about the Olympics this year.”

At the Olympics, Roest will have to deal with Nils van der Poel. The Swedish World Champion has been unbeatable this season, but he skipped the European Championships in Heerenveen to train.

“He’s not here, so we’ll never know what he could have done,” Roest said. “You cannot beat someone who’s not competing, so it’s a tough call. We know he’s the big favorite (for the Olympic title), but I’ll give it my all in Beijing and then we’ll see what the result will be.” 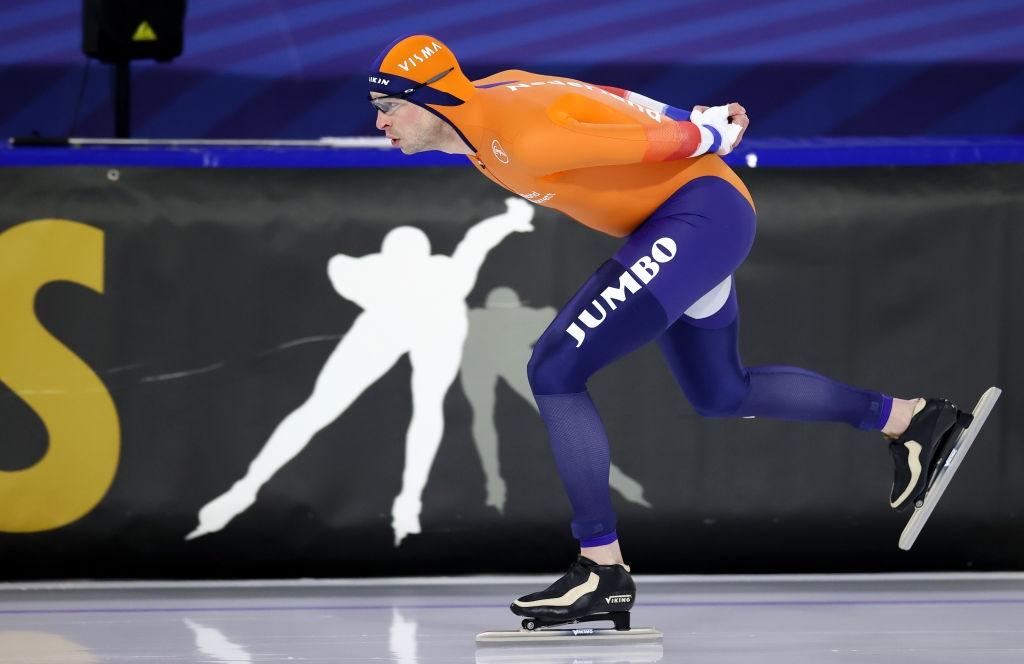 “Today was not a really good day,” Kramer said. “We had a really good day yesterday (winning the European Team Pursuit title), and overall I’m satisfied with the weekend and the qualification for the Olympics.

“I skated already four Olympics before. For sure it’s going to be special to skate the Olympics for the fifth time in Beijing, but most important for me is to do my job over there and try to get a gold medal in the 5000m and maybe Team Pursuit.”

Asked what legacy he would like to leave in the speed skating world, Kramer said: “I started speed skating because I really liked it and I enjoyed the sport, and that’s the most important thing also for future speed skaters.”

The Dutch men won the European Team Sprint title, with Merijn Scheperkamp launching the orange bullet train towards the fastest split time of the field. Second man Kai Verbij extended the lead before giving way to Tijmen Snel to finish it off in one minute and 19.71 seconds.

For Scheperkamp and Snel, it was their first international title.

“I’m happy with this title, but to me the individual distances are more important,” Scheperkamp said.

“We had not trained for this event specifically, but we’re teammates and we train together on a daily basis. This morning we did a trial start with the three of us. To win the title is nice, it tells me that we’re on the right track.”

Norway were just 0.11s short of the Dutch, thanks to a powerful display from third man Håvard Lorentzen, who was 0.46s behind the Dutch split time after Bjørn Magnussen and Henrik Fagerli Rukke set him up for the final lap. Poland’s Marek Kania, Damian Zurek and Piotr Michalski took bronze in 1:20.54.