“I think I’ve got the slowest opener of everyone who’s ever won the World Sprint Championships,” Thomas Krol (NED) laughed, with the gold medal around his neck in Hamar on Friday. The Dutchman came seventh and eighth in the 500m races but made up any lost ground in the 1000m on Thursday and Friday. Kai Verbij (NED) and Håvard Lorentzen (NOR) claimed silver and bronze respectively and they also had good 1000m races to thank. All three men paid tribute to Laurent Dubreuil (CAN), who led the standings after the first day but had to withdraw due to a positive Covid-19 test. 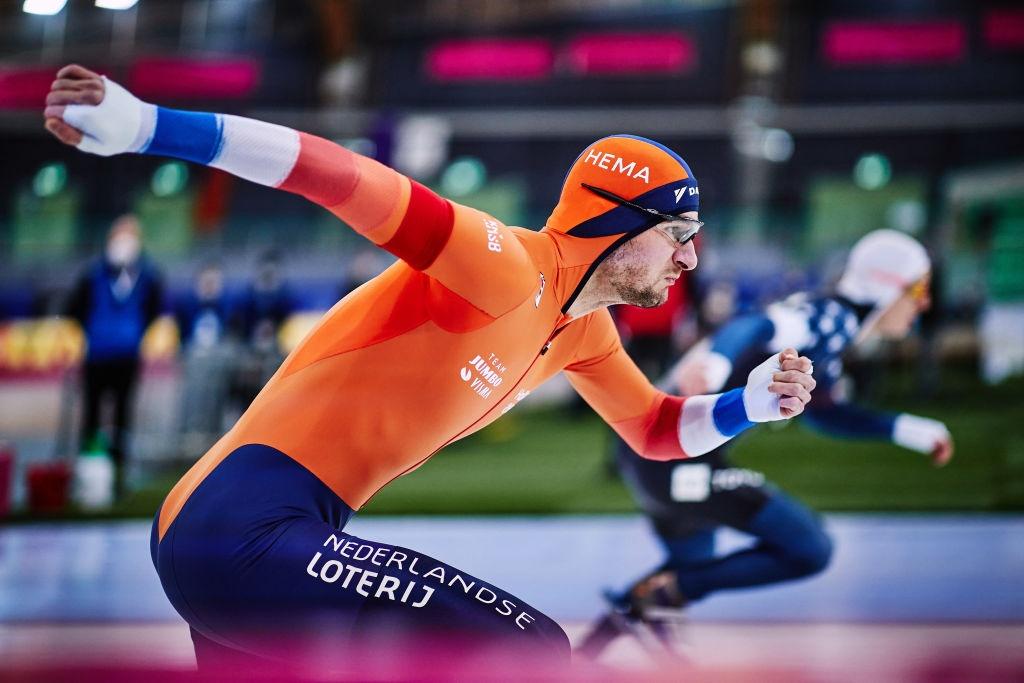 Hearts go out to Dubreuil

“It sucks, you wouldn’t wish that on anyone,” Krol said about Dubreuil’s withdrawal. “That’s why I don’t celebrate too enthusiastically. I’m happy with the title because I did not have this one but I’ve got mixed feelings because Dubreuil showed that he was the best yesterday. The gap was not impossible, he’d still have had to skate for it, but it would have been a difficult one.”

Verbij agreed, saying: “Laurent was the red-hot favourite and it’s a shame he had to withdraw. But someone has to win and Thomas skated best in four distances so he deserves it.” Lorentzen would probably not have been on the podium had Dubreuil been able to skate and he would rather have seen the Canadian on the ice: “I feel really sorry for him, but yeah, it’s always nice to take (a bronze medal),” said Lorentzen.

Dubreuil himself had posted on Instagram on Friday afternoon: “It will be very tough to watch the races, I wish good luck to all the remaining skaters.”

A prize at stake

With the Canadian absent, the remaining skaters began a new battle for the 2022 Sprint crown. “All of a sudden, there was something to win,” Verbij said. Krol started the day in the driver’s seat, with Verbij just 0.12 points behind. Lorentzen sat in third at 0.47 points and defending champion Tatsuya Shinhama (JPN) held fourth place at 0.55 points. 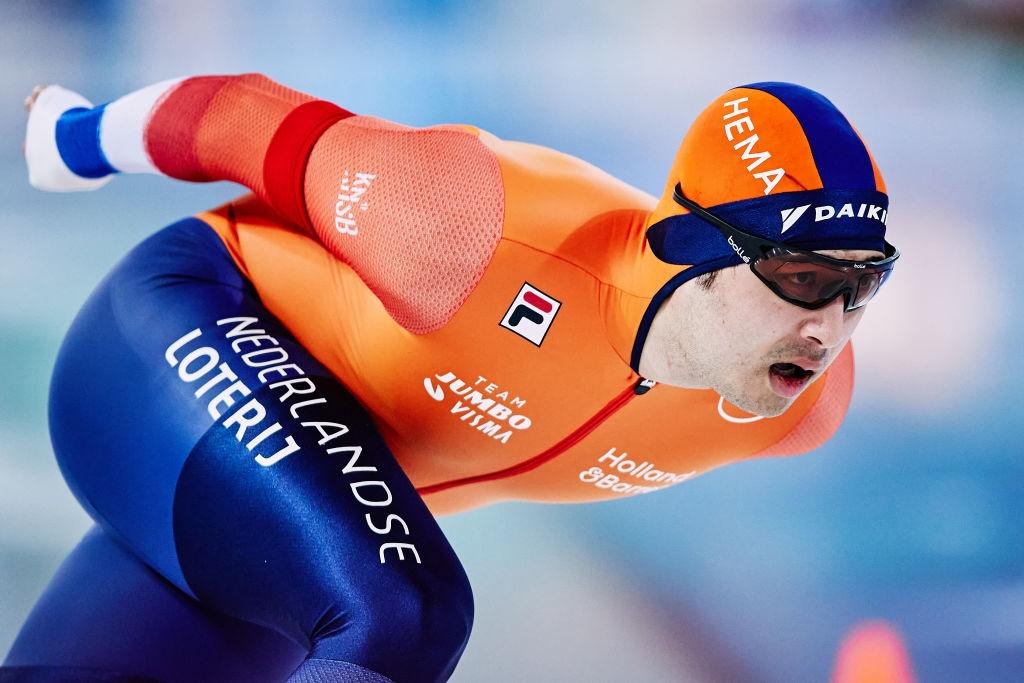 Back to the old boots

With the 1000m yet to come, Krol was confident. “I knew my chances were good,” the Olympic 1000m champion said. He did not manage to skate another track record like Thursday, but one minute, 8.51s was enough to claim the title.

In the last pair Verbij needed to skate 1:08.67 to win and he went for an all-or-nothing strategy. After skating the first three distances on new boots, he decided to turn back to his old pair for the final effort. He said: “In the 500m the new boots still felt a bit uneasy and on the footage of my race I saw that (my strokes) had less length, and length is important (in the 1000m) not to wear out too fast. I was not going to get caught by the ones below me on the ranking, so I thought ‘let’s just try’ and I screwed my old boots back on my blades.”

Verbij finished in 1:08.92 to take third place in the 1000m and second in the final ranking. “It's a bit of a consolation prize,” he said. “But I did not have a silver medal in the World Sprint Championships yet. Now I’ve got the complete set - a gold, a silver and two bronzes.” 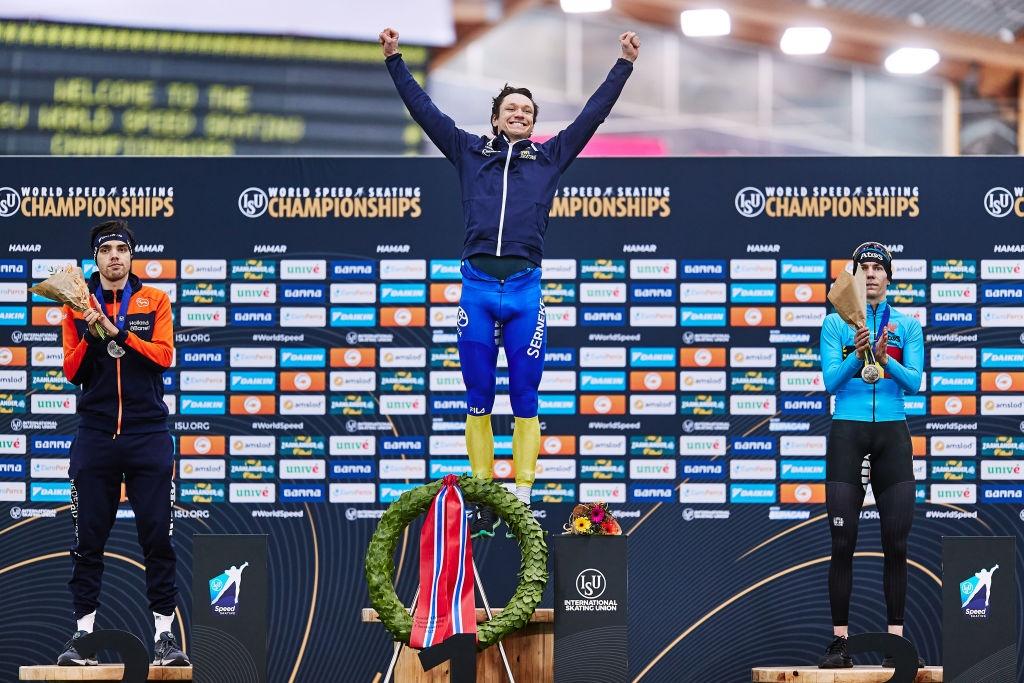 Lorentzen faced an uphill battle going into the 1000m but he thrived in front of an enthusiastic home crowd and crawled back from sixth to the podium, taking second place in the 1000m in 1:08.85. He made up over half a second on Shinhama, who eventually dropped to fifth, with Jordan Stolz (USA) claiming the overall fourth place.

Lorenzten was happy to follow up his Olympic 1000m bronze with another at the World Championships after fighting a back injury all season. He explained why the Sprint combination had been dominated by skaters who made the difference in 1000m instead of the 500m: “Especially in an Olympic season, people usually focus more on one distance and a guy like Shinhama told me that he has only been training for the 500m. You can see that in his 1000m, after 500m it's done. So that's a big advantage for us who skate fast in the 1000m because we also skate pretty good in the 500.”