After being confirmed as the queen of Olympic Speed Skating with three gold medals and a bronze in Beijing, Irene Schouten (NED) added the Allround crown at the ISU World Championships in Hamar on Sunday. The 29-year-old Dutchwoman made up for what she lost in the shorter distances with unmatched performances in the endurance events to leave Miho Takagi (JPN) in second place and Antoinette de Jong (NED) in third. “I won it with my 3000m and 5000m of course,” Schouten said.

Schouten was chasing Takagi from the start after the Japanese Olympic 1000m Champion won the 500m on Saturday. Yet, it was exactly this 500m race that gave Schouten the confidence to go for the much-coveted World Allround title. “Jillert (coach Jillert Anema, NED) said that all great champions have won a World Allround title so I really wanted this one,” she said. “There was a lot of pressure to skate a good 500m. It was only nine or eight tenths (behind Takagi). After the 500m Jillert said, ‘You’re very close, everything’s possible now’.”

In the 3000m, Schouten set a track record to win back a lot of time on Takagi but the Japanese 2018 World Allround Champion hung on to the lead by a 0.43-second margin in the 1500m. And on Sunday morning De Jong also put forward her candidacy for the title. 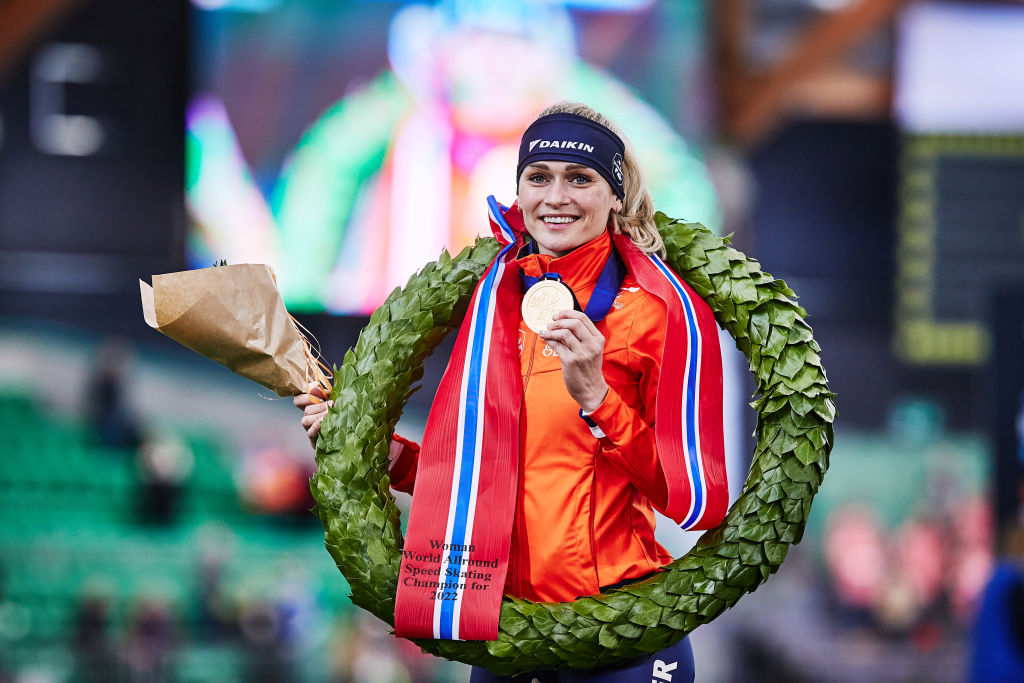 De Jong in the mix

Schouten and Takagi were paired in the final 1500m heat but first Ragne Wiklund (NOR) and De Jong set a high bar, both clocking a time of one minute, 55.18 seconds. Wiklund climbed to fourth in the ranking and De Jong put herself in the mix, finding her name back in second place after Schouten and Takagi had finished their first distance of the day.

Takagi went full gas and starting from the inner lane she had almost caught up with Schouten after the first straight. The Japanese speedster increased her lead over Schouten until the 1100m split and managed to maintain her pace well in the final lap to set the fastest time of the day, 1:55.03.

Schouten held her own, dug in behind Takagi’s back and eventually only lost 1.40s to come fifth in the distance. “I thought I’d lose a lot against Miho in the 500m and the 1500m but 1.4 is the smallest margin with Miho this whole year so I was happy with that.” Schouten was less than thrilled about the execution in the 1500m though, saying: “It was so bad, I was all cramped up trying to stay as close as I could and therefore I was really tired after the race. I thought, ‘how on earth am I ever going to skate a good 5000m like this?’” 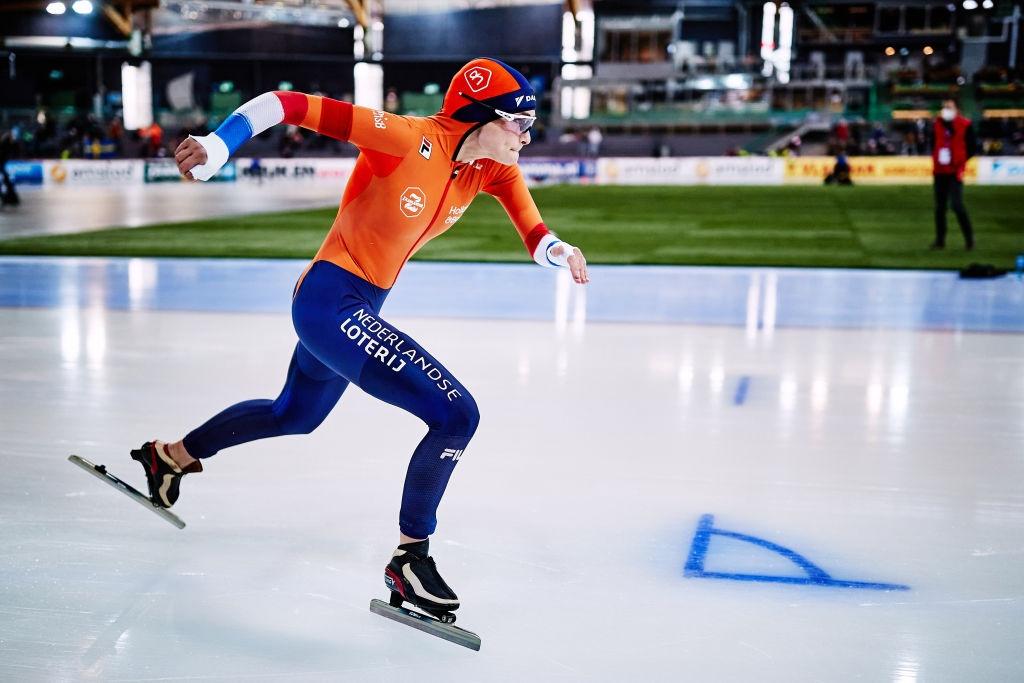 Heading into the final 5000m, Takagi still led the ranking with a 2.45s lead over De Jong while Schouten had to make up 6.08s to win the title. With De Jong in second place, Schouten had to set a bar in the penultimate pair of the 5000m, with her two rivals starting in the final race. The Olympic 5000m champion again had difficulties executing her race plan. She commented: “I wanted to skate 32.5 laps but I did not manage and I couldn’t skate a negative split either. It just did not come easy today but I kept fighting.”

After Schouten crossed the line in 6:52.58 seconds, she did not know if it would be enough but coach Anema reassured her. Schouten said: “He said they would have a hard time beating that and that Miho is not going to skate 6:58 just like that, she’ll need a personal best to win.”

Takagi did skate a personal best of 7:01.97 seconds but Anema was right - 6:58 was not feasible and Schouten could celebrate her career first World Allround title. “It’s a dream season for me, after three Olympic golds, to win this Allround Championships with all the top skaters around. Miho already won this one and Antoinette is a superb Allrounder too. I really wanted this one.”

Takagi emptied the tank completely in the 5000m but felt she had not been able to win enough in her stronger short distances, saying: “I did the maximum I was able to do. Yes, I could’ve done quicker times in 500m and 1500m but I was at the limit of myself. Despite that, I didn’t do well in my favorite distances, I hung on well in the end. I didn’t win but I did my best until the very end and I feel like I want to praise myself.” 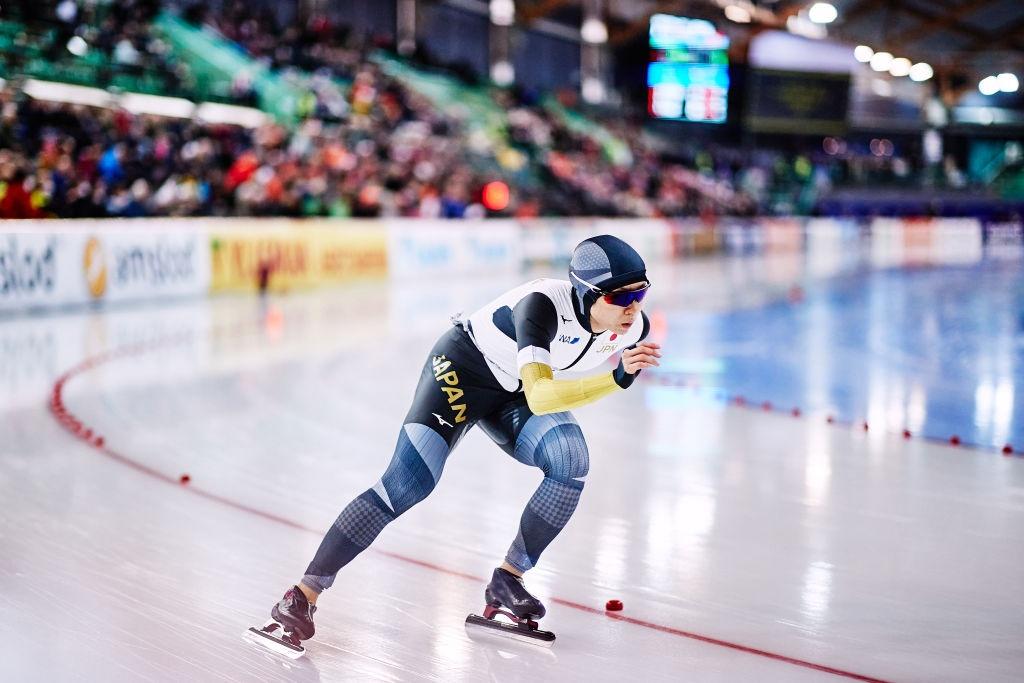 De Jong tried to fight for the title in the 5000m but soon had to give up her battle to stay ahead of Schouten and eventually also gave in to Takagi, who beat her by 3.48s in the final distance. The bronze medal was her fourth in the World Allround Championships. She said: “I’m satisfied. Yesterday I was happy with the 3000m and today I was very close (to Takagi) in the 1500m. I already thought I would end up here (in third place). I wanted to skate a good 5000m but technically it didn’t go well. I wanted to just get in there and try to keep the feeling, but that’s very hard when you’ve only done one 5000m during the whole season. I just did not know exactly where I stood. But overall, I’m happy to be consistent in four distances.”

Sáblíková only one to beat Schouten

Martina Sáblíková (CZE) won the 5000m in 6:51.75 to become the only skater to beat Schouten in an endurance event (3000m and 5000m) this season. “That’s a nice feeling,” the five-time Allround Champion said. “But it was so close and Schouten skated very well. It was after 1500m and that’s really hard. Maybe I had a longer time to recuperate because I skated in the fourth pair of the 1500m and she went for maximum speed in the 1500m because of the Allround Classification.” 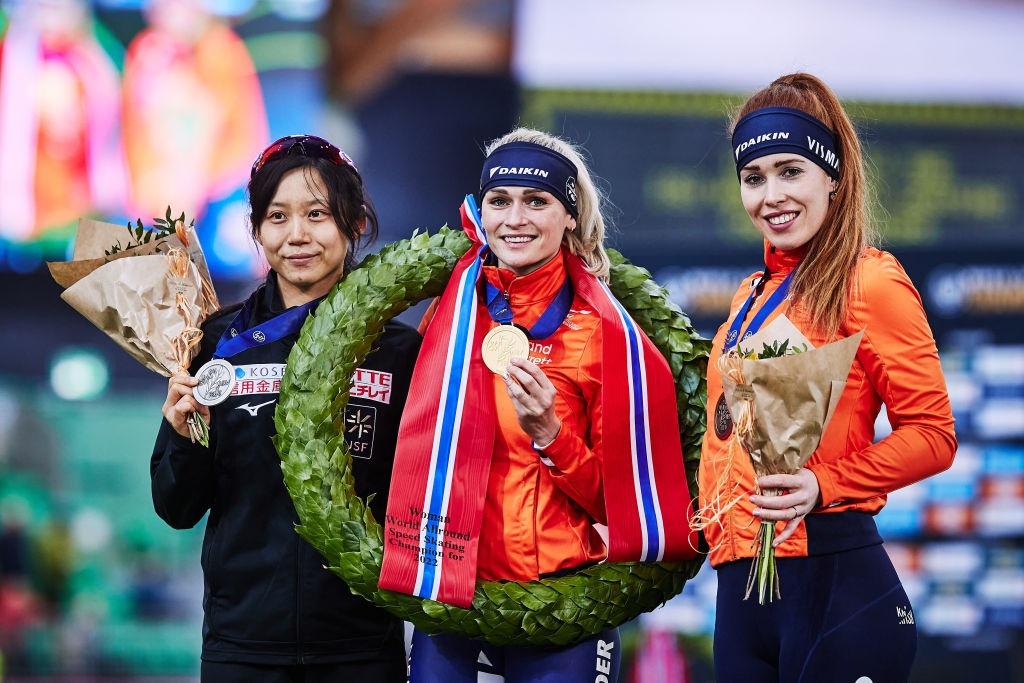